the reveal - Townley and Matheson 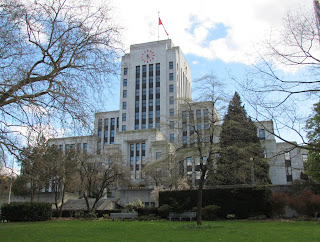 Now that the winter writing season has begun, I am taking a look back at photos and thoughts generated by our visit to the West Coast last March and April. Upon our return I wrote about chance encounters with Vancouver's Moderne/ Deco building tradition. I  published a few unidentified photos of a building I have always loved (and which you likely recognized straightaway) and promised to return for the reveal (in case you didn't.) Hope you didn't mind waiting. 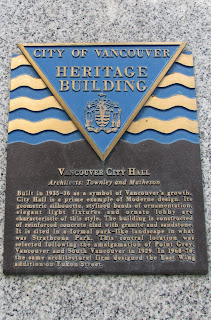 This (and I think it's safe to use an overused word) iconic 1936 Modern Classical with Moderne inspiration structure is Vancouver City Hall. The previous post includes a number of close-ups of timeless design elements. Could spend a long time there. Did.

The plaque got me thinking about the people who made this place of the crest of a hill overlooking Vancouver (which at the time, was largely downhill from here.) Who were Architects Townley and Matheson?  And what can we tell about them, and the city hall they created?

To start with, I found a link to some previous iterations or the civic structure - starting with a tent in 1886, then a  rambling 1893 frame domestic scale building with Italianate touches, later a 1910 Romanesque-inspired red brick with, even later,  (1928) a classical lantern. 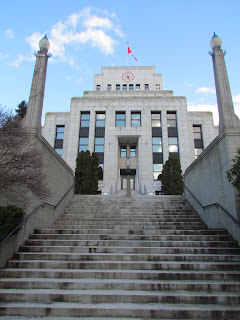 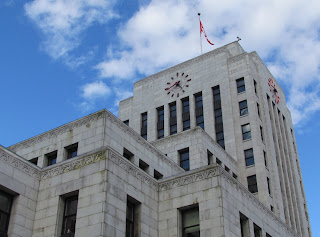 Now this. Nowhere to go from here. One of my favourite buildings in the land.

The Changing Vancouver Wordpress blog provides images of Fred Townley's and Robert Matheson's  offices on Horby Street. Although Matheson died early, the firm continued to design - over a thousand clean modern structures in the city. Sadly, this office with its exquisite restraint and characteristic signage, is no longer standing. What future could there be for a single-storey building in exploding downtown Vancouver?

The best bio I found of  Canadian architects Townley and Matheson was in the November 2015 issue of Scout Magazine (which doesn't appear at all Baden Powelish,) of all places.
Posted by Ancestral Roofs at 3:44 PM