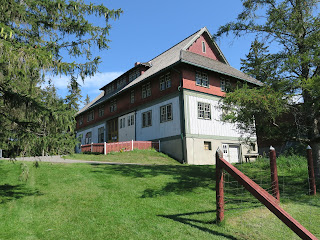 One of my Ottawa junkets this past summer took me to a place I had never visited, not in all the years I lived in the city, not even when I skirted its perimeter in the Arboretum near Hartwell's Locks so often during my Carleton University days.

I was expecting a quiet, studious sort of place. Stuffy research into grain varieties, inquiries into milk yield. Monograph-producing government agricultural scientists. I was astonished to arrive at the already filling parking lot at 10 in the morning, to join the crowds trudging towards the entrance. 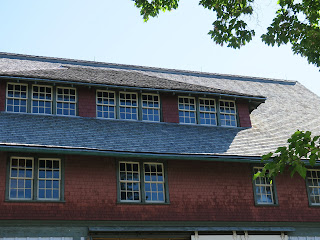 Groups of daycare and school trip kids, in colour-matched teeshirts to reassure their minders. The little princes and princesses clutching their walking ropes, all trending upwards towards the experience of farm. Smells and sounds of cattle, goats, pigs. Dairy Disney. 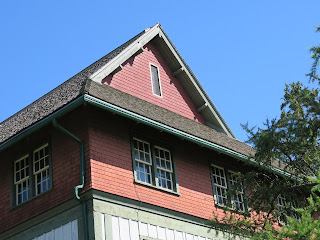 Impressive farm buildings of the early twentieth century. Okay, maybe I was the only one noticing those. But the buildings of Ottawa's Central Experimental Farm (CEF) are impressive, to be sure.

I was instantly drawn to this fascinating structure on a height of land above the barnyard and kiddie attractions. This is 'the Cereal Building,' the Farm's centre for grain research, and a heavy hitter from 1900 - 1930 developing viable new strains of wheat for the Canadian producer.

The barn was built in 1915-16 and is one of the farm's "best preserved examples of a Shingle style building, featuring board and batten siding with shingles above." (quoted from the plaque beside the massive barn doors, which, sadly were closed to the non-scientific set.) Loved the sash windows, shed dormer, slightly belled second storey (a hint of medieval jetty?) and painted trim suggesting half-timbering.

The Heritage Character statement advises that the barn is "a pleasing and competent iteration of the shingle and board and batten vocabulary established for the farm by the great barn..." and cautions against any unsympathetic modernization.

Next came the Canada Agriculture and Food Museum (which made canola exciting!) and the Dairy barn - at the other end of building.  It was fun to wander into the barns, the sounds and smells so familiar I almost expected to look out the open doors to the familiar territory of our farm, or those of the Uncles. 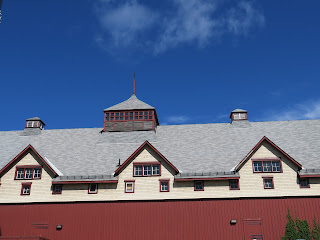 All of the buildings are styled with Period Revival elements, and I noted what I consider to be some fine Arts and Crafts embellishments here and there. Truly lovely structures to wander among. 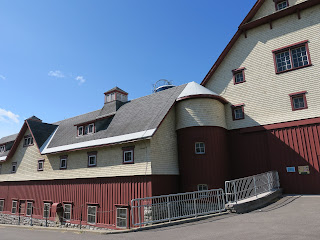 Shingles, board and batten, sash windows, paint colours, trims. Love the shingled silo nestled in the corner. A panel in the dairy barn states that dairy cows have been raised and milked here since the 1890s. This barn was destroyed by fire in 1913, and rebuilt using the original plans, on the same site, the following year. Farmers do that. 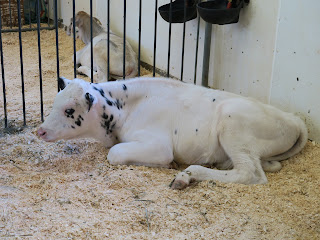 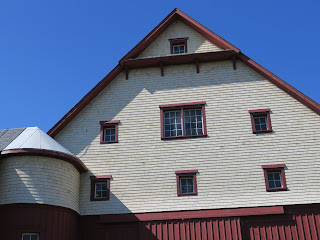 In some areas, visiting kids (and I suppose I could have asked) got to cuddle with the animals. I was astonished to see the gate to the goat pen open, and a group of kids herded in. Goats seemed happy of the attention. It was amazing to see the different way each child interacted. 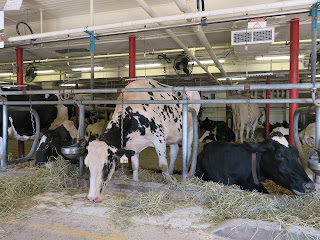 
Okay, readers (those intrepid souls still following along) this is the moment where I remind you that this blog started as a research tool for me. What follows is my shopping list for next visit, a list of links to 'the ones that got away.' Feel free to skip over this bit.

Main Dairy Barn along Carling Avenue (boy I bet those developers twitch when they drive by the open farmland here.

(And should I need more architectural diversion on my next Ottawa trip, I'll save Wikipedia's Canadian Register of Historic Places list. Here's a handy CEF map.)

All CEF structures are carefully documented, with FHBRO (Federal Heritage Buildings Review Office) credentials, Heritage Character Statements and DFRP numbers. These folks are not fooling around. This IS Ottawa, after all.

Above beyond the pointy fenceposts and pavement is  Building #94, reinvented in 2015, evolving from the former Machine Building into "one of the newest and most imaginative

Didn't go in. That's about the moment when I spotted the goat enclosure.

For all that this is a fascinating field trip, it is a serious science/heritage destination (here's lots more info on Wiki.)  Should that escape the visitor, the fact that the Central Experimental Farm is designated a National Historic Site may carry weight. It was designated in 1997 because of its huge significance as a cultural landscape, a farm within a city, and the source of important Agri-Food scientific discovery over its lifetime. 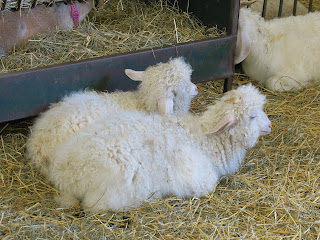 Nice to know that these fuzzy fellows have friends; the group Friends of the Farm will be more and more important as years, and development demands advance. The past few years there has been tension, shall we say, about the site of the Ottawa Civic Hospital expansion, which has set its sights on a site on the farm.
Posted by Ancestral Roofs at 11:55 AM