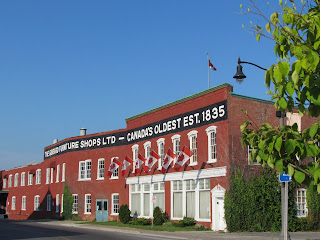 We've been watching the former Gibbard offices and factory in the years since its closure. While accepting the inevitability of decline, we've been sustained by the promise of a renewal, a reinvention, a repurposing of the historic place. A few Sundays ago, we had a good look at the Gibbard future.

Nothing exudes confidence more than an "over 80% sold" announcement papered over the concept billboard of a new vision for an old, unused industrial building. Especially one with the great history, and deep foundations of the former Gibbard factory in Napanee.

We've visited from time to time, always mindful that a new use must be found for the venerable furniture factory whose time came, back in 2008. This video tribute honours Gibbard's proud history.
An ascerbic viewer comment on the video  summed up the feelings of many: "now the building is being gutted like a fish." But I am hopeful that something fine will endure.

Here's a tour provided by some urban explorers. Although I don't identify with their approach, they did capture some fascinating photos of the interior of some of the buildings, prior to demolition.

On our last visit we had a wander for ourselves - strictly on public property. I must admit, it was difficult to see the piles of old brick (for sale incidentally, proceeds to the local hospital), twisted rebar and chunks of broken stone. And the huge hole and raw land that once was Gibbard industry.

But it was fascinating to peer down through layers of limestone, pondering the concrete floor that had been laid to support the heavy building and its heavy equipment. The energy put into creating this huge complex is being released.

Several iconic bits remain. The tall brick tower, its cast iron door propped up in another location - to be reunited one day? 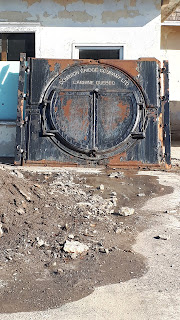 So what rises in its place? This is the website of the Gibbard District, which communicates the residential/community space vision very enthusiastically -  given that it was created to sell us part of it. A very urban concept will be forming up in the shell of the former factory.

East end Napanee will have to hustle to catch up to the bold styling, it's a bit of a wasteland. But the rest of the town is very appealing, with a great waterfront pub, fashion shops drawing in the Montreal to Toronto crowd, and lots of heritage architecture. And the wonderful Springside Park Trail. Here's a sample. 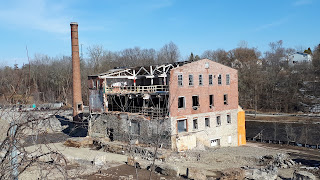 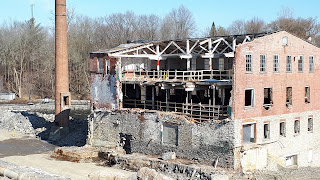 Here are some links to media accounts and reflections on the project, a Kingston Whig article, a worthy e-History project, and an entrepreneurial approach to  the old-growth wood from the demolished factory.

Posted by Ancestral Roofs at 12:23 PM