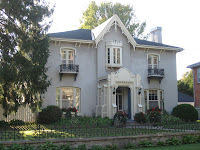 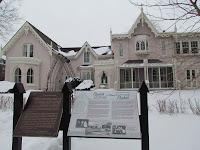 We all think we know what Gothic Revival style looks like - central pointy gable with a finial and/or pendulum and barge-boarding right? Lancet windows. Merrill Inn in Picton. Seymour House in Madoc. Much as I love those details, I like these two buildings because they display some of the other less common features brought into c19 Ontario from the English Gothic or medieval era - hood mouldings and carved label stops, trellis work buttresses, and oriel windows - so Romantic!! One home is symmetrical, the other delightfully irregular in profile.
The house on the left is one of my favourites in Belleville. According to the Hastings County Historical Society book Belleville's Heritage (1978) , the house was built in the 1850's for Adam Henry Wallbridge and passed on to family members. The house is stucco over stone, a lovely backdrop for the stately porch with its delicate sham buttresses. The oriel window with its cresting is so regal. This house has presence ....in a neighbourhood of fine homes in outstanding condition, it has a certain something that sets it apart.
The building on the right is Elizabeth Cottage in Kingston. It is very difficult to photograph. A wide property snug against an unattractive neighbour, it is best appreciated (unfortunately) from the middle of a very busy and very slushy street (the day I visited recently). Outfitted with plaques as befits its stature and story, the home is definitely feeling its age - it's a retirement home with space to let, according to yet another sign around the corner. The right side was built about 1841-43 by Edward Horsey, who went on to become the architect of the Provincial Penitentiary and Frontenac County Court House (according to Margaret Angus, in The Old Stones of Kingston). The left side was a separate, later, cottage, joined elegantly to the original. Only the modern sun-room interloper between the sham buttresses spoils the Gothic whimsy. The unmarried grand-daughters of the original owner established the home as a residence for retired gentlewomen (conjures up the duchesses in "reduced circumstances" of English novels.)
After several generations of stern Georgian family homes rising in the wilderness, the Gothic revival must have been an exotic change. Championed by John Ruskin and his contemporaries, Gothic revival style sought to honour the work of craftsmen, and the spirit of Gothic churches. In some ways, we still feel that tingle of the eccentric, the theatrical, the spirit of the age when we stop to appreciate a Gothic Revival home or church.
According to my prof Shannon Kyles, Strawberry Hill, built in 1750 by Horace Walpole, was the first house to be called Gothic Revival. Situated in the London borough of Richmond, the house has just completed a 9 million pound restoration by the Strawberry Hill Trust and is being reopened this April. I would love to visit but may have to satisfy myself with return visits to www.strawberryhillhouse.org.uk. Or to my favourite house on Bridge Street.
Posted by Ancestral Roofs at 7:55 PM