From our house to yours 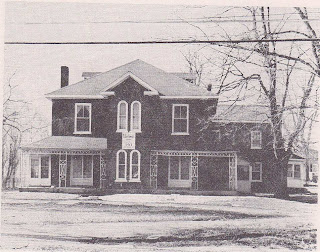 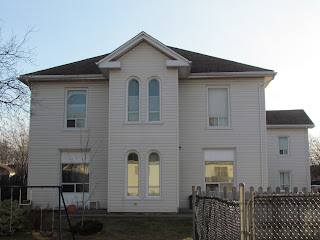 The years have not been good to 193 West Moira, Belleville. I hope they have been better to the children who stayed under her roof. This house was the Marchmont Home, a receiving and distribution home for immigrant orphans from the British Isles from 1875-1925.

The top photo is borrowed with many thanks from 'Belleville's Heritage', a 1978 publication of the Hastings County Historical Society. The bottom vinyl-clad version was captured today, only by sneaking between two bungalows planted on the original front lawn of the children's home. 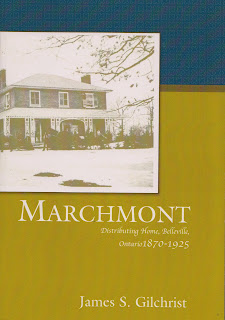 When my English immigrant husband met my Prince Edward County born and raised mother, he was astounded by the number of English vernacular expressions which peppered her "County" speech - expressions his Lincolnshire family had used for generations - transplanted somehow to this family which hadn't left PEC since their arrival in the late 1700's.

I believe the link is this very house. Mom's words in the family history document below would seem to confirm it. She writes " We had a series of hired men, they were English and no doubt came to Canada as Bernardo boys....I'm sorry to say many of them were overworked and abused ...These two who came to our place had a good home, lots to eat and certainly were well used. They were very ignorant about farming...(but) soon fit in with our family life as well as the workings of the farm."

Two great books about the English orphan immigration movement, 'Marchmont' (cover above) by James S. Gilchrist of Trenton and 'Barnardo Children in Canada' by Gail H. Corbett of Peterborough are powerful voices telling the story of  homeless children who found homes here, and contributed to the growth (and the language) of Ontario. They tell of the organizations and the great-hearted people who sought to improve the lot of many disadvantaged children in the UK.The story is complex, sometimes dark. It's history - not a story book for children. But it's a story that should be told, and not forgotten.

Thanks mom, for remembering to tell those stories to us. 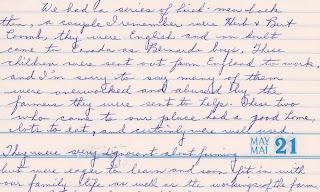 Posted by Ancestral Roofs at 8:27 PM