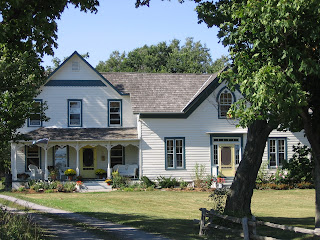 In 1784, Patrick Pierce, UE, British militiaman, landed with Loyalist settlers in North Marysburgh. His grandson John, my great-great-grandfather, built the right side of the double house in this photo sometime in the 1860's. This was the house my brother and I grew up in.

The fine stone house below was built by Isaac Striker, my maternal great-great-grandfather, around 1865. Isaac, one of PEC's pioneer cheesemakers, was the grandson of  Sampson Striker UE, who left his Duchess County, NY, home in 1786 to settle first in Adolphustown, later in Prince Edward County. 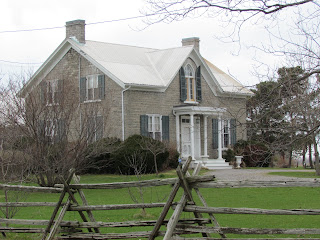 Today I joined the Quinte Branch of the United Empire Loyalists Association of Canada. This year, I will search records to document these Loyalist connections and apply for my Certificate as a descendant of a United Empire Loyalist. Should I be able to find the "proofs" which will validate the connections between the generations, I will be entitled to "use the post nominal letters UE after my name, an honour that dates back to Lord Dorchester's Order in Council in 1789, conferring recognition of the service of the Loyalists in their defence of "The Unity of the Empire." (from the Bay of Quinte Branch website)

I grew up knowing the story. But it's like always knowing the way to a well-known place, without ever seeing the map in print. This year, I draw that map.
Posted by Ancestral Roofs at 5:28 PM