Thanks to several great books that I've recently acquired, I am making the formal acquaintance of the province's town halls. Right now I'm enjoying Town Halls of Canada, published in 1987 by National Historic Parks and Sites Branch, Environment Canada, written by various authors. The collection of essays is based on the Canadian Inventory of Historic Building, a hugely important national survey of our built heritage up to 1880 (later in the west), initiated by the Federal Government, carried out from 1970 - 1978. More on the inventory here. This growing awareness of our historic buildings led to a lot of publications being researched and published during this time, including our own Belleville's Heritage Buildings East of the Moira River.

From the number of photos I am able to find in my files, it's quite clear that the town hall has not often caught my attention. Why not, though, when a town hall is bound to be noteworthy? The town hall is a community's expression of itself, its public face, incorporating its pride, its status, its sophistication, its aspirations, its confidence in the future. It's a gathering place, a crucible where community is created.

In the earliest days, the only gathering place might have been an inn. I'm thinking of Margaret Simpson's log tavern which served as a meeting place in fledgling Belleville, for everything from militia musters to magistrate's court to political meetings - and to plenty of drinking and singing. See more on that in Gerry Boyce's super social history of the area Belleville: A Popular History.

Throughout the nineteenth century town halls evolved along with the communities they served; from the earliest simple one-room halls, to multi-purpose buildings housing paid staff administering an expanded range of  public services. Along the way, some communities undertook monumental boosterish structures, like those we see in Kingston and Cobourg. By the end of c.19 new plainer efficient modern purpose-built office buildings were replacing Victorian grandiosity.

I'm devoting this post to the simple open hall plan - unspecialised one room buildings, gable-roofed, entrance at gable end, typically one, but occasionally two storeys (the second floor containing a second hall), seldom much decorated -  similar in scale to the churches and schoolhouses springing up in communities in the early decades of the c.19. In rural areas, such plain halls persisted as town halls and social centres up to the turn of the 20th century. In the west, they started later and endured even longer.


C.A.Hale, who wrote the chapter on 'Rural, Village and Town Halls' for the book, describes a typical interior, "austere and very simply furnished...heated by a central floor stove." Council and spectator areas were separated by a railing or elevated platform, with plain wooden chairs for council members, perhaps a bookcase for the clerk's papers, a table for the secretary, and benches around the room. Those benches would be filled when the platform doubled as a stage for community concerts. Queen Victoria would preside  from her frame above the wainscoting. Council business concerned "streets, drainage...animals running at large, constructing public buildings, wharves, ditches and fence, and establishing bounties..." (hopefully on wolves, not hombres). "Later, fire and police protection, sewage, public health and education came to occupy many of these councils." (That's when halls became multi-use.) 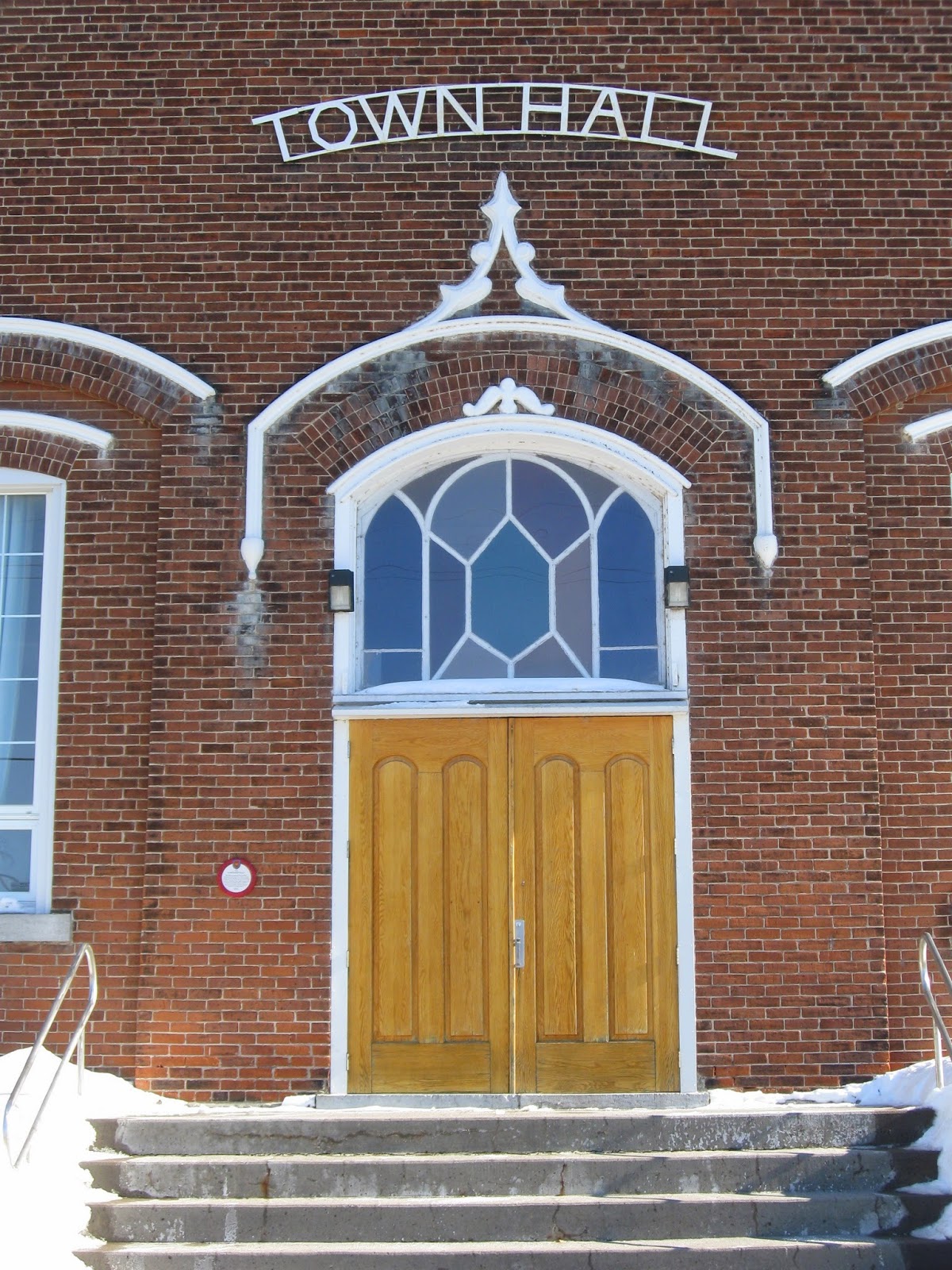 I've somehow missed photographing a small town hall considered very significant to the authors. The Adolphustown hall "one of the oldest municipal halls in Canada," was built in 1840 and has been restored in recent years and clad in board and batten; it's in regular use by the UEL Association Quinte Branch. I have attended genealogical workshops in its plain space and I salute the volunteers who saved this worthy building.

Sophiasburgh township hall(1878) in Demorestville is also mentioned for its "graceful arches and Gothic Revival ornamentation." Marion Macrae is less kind. In Cornerstones of Order (1983) she has this to say: "Carried away by the picturesque possibilities of bargeboards, window labels and transom glazing, an unidentified designer decked Sophiasburgh township hall with a lavish hand."

Ameliasburgh Town Hall (top) was built in 1874 of squared stone with light-coloured Kingston limestone window surrounds with keystones, and quoins. Cruikshank and Stokes (The Settler's Dream) describe the starred rose (somewhere else I noted it described as a Masonic symbol) in the Gothic transom. The hall is in regular use today.

Bath town hall (1861) is an example of a more sophisticated design, possibly inspired by the pattern books available to builders by this time,  with its entrance portico and pediment above. Ancaster old township hall is quite splendid indeed, but I suspect it was a single open hall design.

So. What stories can a town hall tell me? Maybe not the same tales as those told by an old house, of families, life and love, hopes, tragedies, dreams. Until now, a town hall didn't speak to me - I thought of  it as an administrative place, a place of bylaws and plebiscites - but of course there are human stories there. The town hall is the public face of the people who live in those houses. The town hall tells of their daily challenges and preoccupations, and their aspirations for themselves and their communities. Time for us to meet.