For twelve years of my career I worked on the lovely campus of the Sir James Whitney School for the Deaf. For twelve years my energies were focussed on the needs of students and staff of a highly specialized school. For twelve years, the exquisite late c19/early c20 buildings were the background of my life...and as background goes, they were seldom given the attention they deserve.

Not long ago I visited the campus with my architecture mentor and friend, Shannon (she of the Ontario Architecture website) and two lovely friends, Bob and Michelle. Shannon's a good person to have along on a junket, no?

Through their eyes, and through the luxury of spending focussed time in late August before the place came to life for the start of school,  I saw these lovely academic buildings, and the fine historic campus of old trees and heritage plaques, as if for the first time.

I admired the collegiate Gothic main school building, its dignified doorways and medieval decorative elements, without ever once wondering what was that skirmish at the front of the line, why a student appeared unhappy or isolated, how to meet a paperwork deadline, or resolve a difficult issue.

The day we visited was dull; I returned a few days later, and  had another wander around campus. The huge property was still abandoned, warmed by late afternoon sun pouring like treacle down the west-facing building facades. School was scheduled to start a few days later.  And that reality (for others) didn't intrude on my enjoyment for a second. 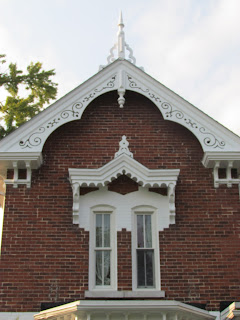 Nic Lambooy, an architect whose work I come across occasionally in local architectural heritage documents, wrote a description of the early buildings on the Sir James Whitney school campus.

I've used some some of his comments about the buildings here. The Superintendent's house (as we all called it, although none of their ilk ever resided there in my era) was built in the 1870's for the Principal. Just this summer, the Gothic revival wooden barge boards, finial and pendant have been repaired, and the elaborate hood mould above the windows restored and painted. The segmental arches above the vertically proportioned windows are curious, repainted bright white evoking the eyebrows of a surprised senior administrator. 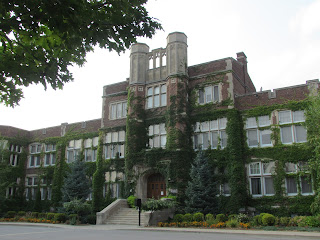 The main building of the school was built in the 1920's, Collegiate Gothic style, an eclectic style with Medieval presence, and detailing. The ivy clambering over the walls is picture perfect. This school was built in front of a previous building, which was then demolished. The materials are c20 -  manufactured brick, reinforced concrete and concrete masonry work (we had a long debate about the mouldings around the doors - stone or concrete? - not knowing the date of construction, and not finding a datestone anywhere.) 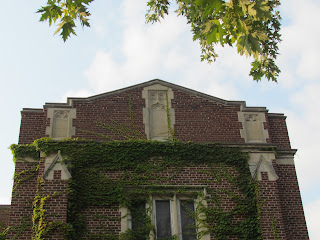 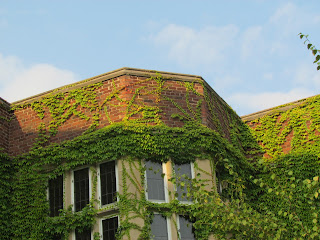 The school was originally named the Ontario Institution for the Education and Instruction of the Deaf and Dumb (not a pejorative then) in 1870. The current school opened in 1923 as OSD, the name changing to Sir James Whitney School for the Deaf in 1974.

This year is the 145th anniversary for the school. There will be tours of the school's historic art collection and architecture. A history of SJW written by colleagues Donna Fano and Clifton Carbin is due to be released soon. Stay tuned.

The school website contains information about SJW, school activities and curriculum for deaf students. You can view a welcome message in American Sign Language by Principal Janice Drake here.

Posted by Ancestral Roofs at 8:23 PM