Porchfest - Come for the Fest, Stay for the Porches

This little video popped up on my FB this morning. It celebrates a friendly community event in Belleville's Old East Hill area, in which we participated a couple of weeks ago. Porchfest. Seventh annual. The event was started by a couple who lives in the area, and has since been taken over by a service club. Porchfest features area musical groups, duos, singles performing al fresco, on residents' porches. By prearrangement, of course. A map is handed out at the opening, which takes place at 'my' house, Glanmore; the map's a treasure hunt of music, chance encounters with friends, kids, dogs, bicycles, sun, and oh yes, the houses of Belleville's lovely OEH. 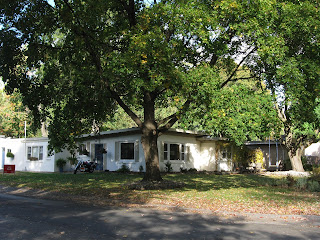 Our first stop was at the corner of Queen and Dufferin. Great duo, and an opportunity to have a close look at a simple flat roofed prairie style home (one in a row of three!) which I've long admired. I enthused to Denis; as it turns out out we were standing beside Barry, the home-owner. He was able to shed some light on the modernist homes of the OEH - finally! Barry explained the unique features of the trio of homes, including the radiant heat system which keeps him in bare feet all winter. 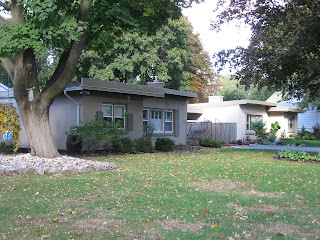 Who was the architect? urged I, sensing at long last a breakthrough in the mystery of the scattering of moderne and prairie inspired homes in the immediate area; Dufferin seems to be the epicentre. Barry astonished me by explaining that to his knowledge the 'architects' were high school students in a design competition. 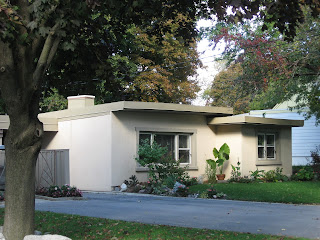 Further on down the street, I spoke with a woman standing in front of yet another example of the style. She lives across the street, in a slightly altered version of the flat-roofed homes. In a neighbourly gesture, she fetched her brother David (and pen and paper) who told me the whole story. Music of the very good group 'Tuesday Night Music Club' floated past, as I scribbled notes.

According to Dave, who lived for years in one of the stucco houses, the designer of these and several similar ones, was Doug Mews (now I may not have the spelling correct; do get in touch if you know more.)
Doug was a drafting teacher at Belleville Collegiate Institute. During summer holidays in the 1940s, he designed and built a number of homes in the area. All featured flat roofs, wide eaves and the simplified style of Frank Lloyd Wright and the Prairie School.

Now let's see. What did I accomplish on my summer break?
Posted by Ancestral Roofs at 6:07 PM