What do the Birds See? 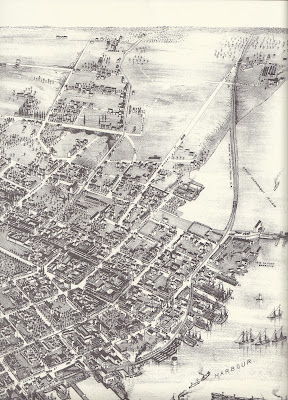 Not long ago I spent a pleasant afternoon with a friend at Queen's University Archives, assisting in her research through her poet husband's considerable fonds. On a break from our quest, I browsed two giant aerial photos of the city, tracing the unique street layout of this wonderful city. Later, I discovered that archivist Jeffrey had available for sale, copies of the 1875 'bird's eye' map of the city. Sold. At a glance, it becomes apparent why it's so easy to get lost in Kingston. The gores. The broken front.

From my building research mentor Lois I long ago learned the value of birds' eye maps. They are "non-photographic representations of cities known as perspective maps, aero view or panoramic maps."(Queen's website) They rival aerial views, in my estimation. Produced by folks who never left the ground. Instead, the creators walked the streets, noted the streets, structures and topographical features used perspective to recreate them in two dimensions,
Denis said during his apprenticeship  he was taught how to draw in three dimensions, now known as the x and y, and  the third dimension known as the z axis. The process was called third angle projection. And he loved it.
Me, I'd rather look at the real thing. From the perspective of a bird who appears to be descending gradually over the city after a Lake Ontario crossing, looking for a clearing on which to alight. 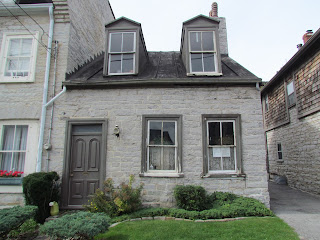 The Kingston map was created by Herman Brosius, a lithographer, who created of these views in 1875. These aren't just sketch maps - the bird's eye map accurately lays out the streets, parks and harbours of the city, and even portrays readily identifiable buildings.  A key at the bottom identifies significant businesses, churches and public buildings numbered/lettered on the map.

What is remarkable to me is that, armed with a magnifying glass, you can discern individual buildings with their architectural features.

In the face of a brisk north wind we walked through much of the neighbourhood portrayed in the quadrant of the map I posted above. We walked into that map, bringing its third dimension into focus.

Now that I have the map spread out on my study floor, magnifying glass in hand, I am beginning to try to match up the tiny depictions of Kingston buildings before 1875, with photos I took recently on a walkabout in the area Margaret Angus in The Old Stones of Kingston calls North Kingston (it got that name when it didn't venture too far from the harbour, I suppose.)

Must go back soon. On a warm, wind-free day. Or my map and I might get airborne.

A few post-scripts:
Here's an interesting article about bird's eye maps from a website in Connecticut, highlighting the civic pride and idealism behind the art form.

During my research into old Kingston neighbourhoods, I came across this fascinating blog

And finally, Belleville too was portrayed in a bird's eye map, dated 1874. Must be by the same lithographer. I purchased my copy at the Community Archives/Hastings County Historical Society. It's printed on heavier stock, and seems clearer as a result. The title of this post is based on (or plagiarizes, I couldn't find the issue) an article in the HCHS's publication Outlook. I'll keep looking.
Posted by Ancestral Roofs at 3:31 PM