In the late 1830s the hills and valleys now blanketed by the lovely city of Ballarat, in the Australian state of Victoria, were the preserve of a few squatters on indigenous land. In 1851, gold was discovered and the rough shelters of the city (and from what I can tell, the rough habits of those dwelling therein) were transformed almost overnight and an  architectural grandeur befitting Ballarat's new status in the Empire sprouted. Most of those buildings, and the imposing hilly streets on which they stand, delight still today. 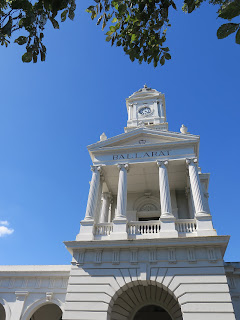 First impressions are everything. When travel by train was the norm, Ballarat Train Station opened (1862) with classical fanfare, and still holds its own. You may appreciate Streetview's  wider view. Train buffs may appreciate that the station has the largest interlocking mechanical swing gates in Victoria, along with original signal boxes and goods sheds. 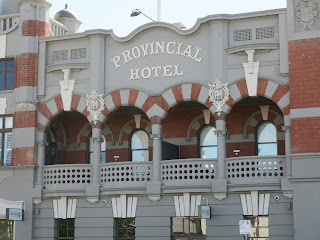 The Moorish-inspired Provincial Hotel was built in 1909, and sits across the street from the station. Just the spot for the commercial traveller or visiting provincial official to rest up and steel himself for the day's business along the hill up Lydiard Street.

For years the hostelry languished, but endured through its "eyesore" period, and has been refurbished as a boutique hotel.

The once opulent Reid Hotel (1886) nearby along Lydiard Street looks a bit down on its luck, but it looks like home to the town's less well off folk looking for an affordable bed as Reid's Guest House. The Reid Hotel was one of the gold rush era's "coffee palaces", temperance hotels which served nothing stronger than coffee. But when I think back to Australian coffee...


The Lydiard and Central Ballarat walking trail guide lists no less than 60 structures from the gold-rush building boom, most within 4 blocks. Fortunately we broke our journey with a night at the former Bank of New South Wales (1862,)  updated and very comfy. It's the two storey building with rounded window pediments, at the right of this photo. Here's a link should you wish to book. And here's the neighbourhood should you wish to check it out.

Just down the street was the George Hotel which was associated with ours, offering some great meals and diversions. Took them up on all offers. The George Hotel (third generation, 1902) sports a unique three storey cast iron balcony, and a view of the (former) Mining Exchange across Lydiard Street. 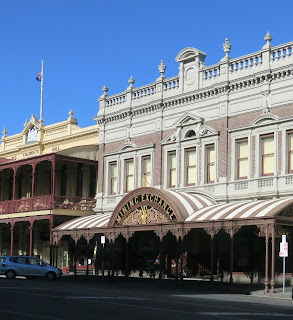 The Mining Exchange (1887-9) where the buying and selling of mining shares took place, is typically boom-town classical in appearance - the parapet is a thing of wonder, and the modified Palladian windows (one with pediment) are just grand.The bow-fronted balcony masks a wide elliptical entrance and rusticated arches. The balcony with its cast iron was reinstated, copying the original,  in 1986.

I'm not making this up, I found the heritage listing online. Thanks guys. 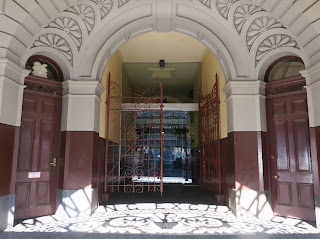 The wild-west gold mining story is told at a popular historic park  called Sovereign Hill (opened 1970) where costumed animators stage gold-rush activities for the tourists. We preferred to wander the streets of the city, and let the  somewhat excessive architecture of Lydiard and Camp Street relate stories from those heady times. I find this juxtaposition fascinating - Sturt Street with its central treed boulevard was built wide to accommodate  bullock carts (which do not turn on a dime, as you can imagine) arriving and leaving with gold field wealth. Imagine the contrast between ox team drivers bringing the dust and sweat of the outback and the newly spawned refinement of this grand aspiring Victorian city with its status as premier city of Victoria's goldfields.

I've found historical photos at a few sites, but  I feel uncomfortable about sharing them without permission.  Photos of miners in 1887, an etching of the early townsite complete with bullocks reclining in front of the frame shack which was Washington Bowling Saloon, restless crowds in front of the Mining Exchange, an image of a gold shipment departing by horse cart for Melbourne under heavy military guard are all available in the Ballarat Historical Society's catalogue. Here are some Past and Present photos going back to 1920s  Go time travelling there.

The amount of gold extracted in the area from 1851 to the present was 643 tons, about 29 billion dollars worth. That could buy a lot of pedimented porticos. And it did, in the same frenzied times that 'Marvellous Melbourne' of the 1880s was benefiting from mother earth's largess.

Admire the splendour.
A particular favourite of mine was the 1905 Renaissance Revival/Venetian Gothic inspired National Mutual Insurance Company building at the corner of Lydiard and Sturt Streets. With its
recessed loggias, trefoil Gothic arches abounding, "cusped stilted segmental arches on the top storey" and "openwork octagonal structure" on the roof, once domed, with corner pinnacles, it's a dazzler. Crazy eclectic commercial building.

The modern shop-fronts and awnings don't do a thing for it. The designation report states that there were originally "three corner mansarded turrets capped by finials." A pretty splendid structure, even for ebullient Ballarat. 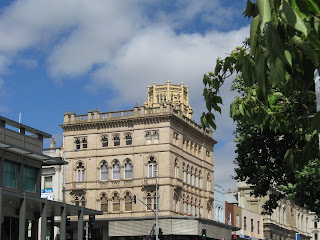 Craig's Royal Hotel billed as the "legendary Australian gold-rush era grand hotel" was impressive. My dear man almost had me talked into a $350 stay in a richly panelled fourposter bedded room, so we could visit the outstanding Minton tiled lobby at our leisure, but an incredibly sniffy concierge so put me off, that my only polite recourse was to decline the Craig's invitation. Here's the hotel's long history 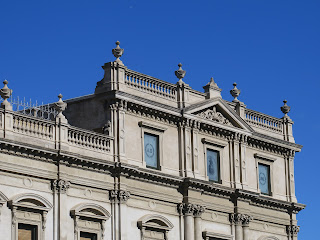 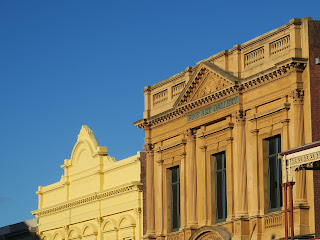 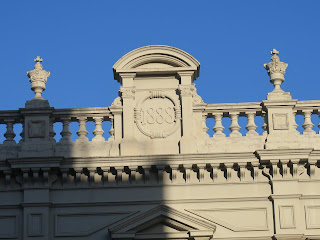 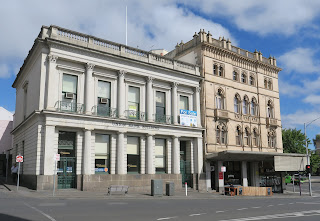 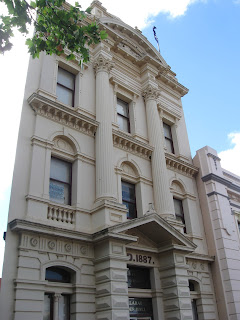 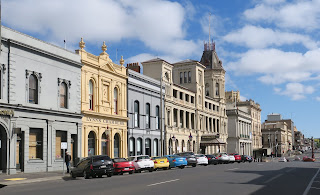 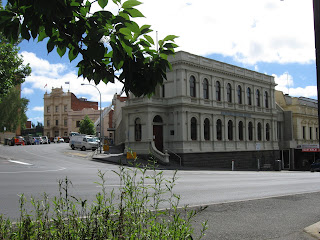 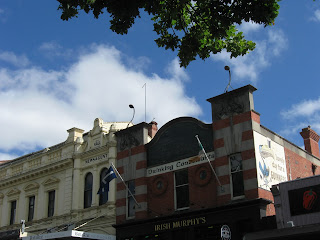 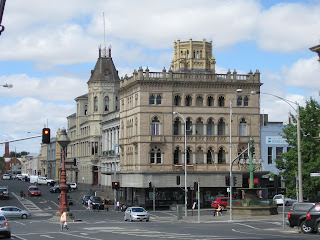 Another look at the former National Mutual Insurance Company and Craig's Royal Hotel. If you fancy a wander, here's a Streetview link starting you off at the corner of Sturt and Lydiard Street.
If you find this place as fascinating as I do, you may be interested in the classic (1870) research resource by William Bramwell Withers, available online.

And incidentally, the city was originally (and sometimes today to honour its origins) named Ballaraat. The name is a (curt) nod to the Aboriginal people who were there to witness European ingress in 1837. The name is derived from the words 'Balla' and 'Arat', meaning 'resting place.'