A theory expounded by delightful Sydney guide Rob, that the delicate railings and decorative bits were transported from the UK as ballast, got me scratching my head. As did the incredible wealth of the filigree trims, despite those patriotic WWII scrap metal drives, which saw most of the post 1850 private and public gates and cast iron railings in Great Britain chopped off at ground level.
This article recalls communities coming together to beat fences into swords (my own husband recalls streets lined with stubs of former railings in post-war Lincoln) and raises some disturbing questions about where all that iconic English fencing ended up.

All that being said, despite brief mentions of local metal drives in Australia, the cast iron filigree remains down under, in abundance. Guidebooks direct the traveller to each town's special precinct - and other towns are just, well bedizened throughout (Ballarat and Queenscliffe to name two.) Melbourne claims to have more decorative cast iron than any city in the world. I hope to go back to count.

Incidentally, the LondonGardens article (link above)  reports that many traditional iron craftspeople have been in recent years restoring England's pre-war cast (or wrought - more later) glory, that being the first stop for most homeowners restoring historic properties. And no wonder. 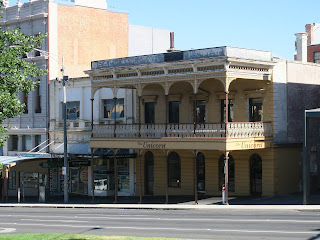 Chatterton Iron Works of New South Wales specialize in restoration and reproduction of balustrades and lacework. Their website contains hosts of photos for anyone feeling like indulging in some armchair ogling. And they're the go-to people for koobaburra mailboxes. Just sayin'. The site demystifies the various forms and designs of iron lace, and says it better than I, so I invite you to visit.

Incidentally, if you really want to indulge here's a Pinterest  gallery that keeps on giving. 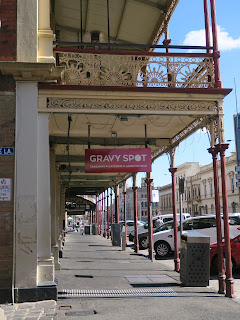 John Ruskin, that Victorian arbiter of taste and craftsmanship, considered cast iron 'cheap and vulgar.' It was Ruskin who recoiled at the manufacturing frenzy occasioned by the Crystal Palace which housed London's Great Exhibition of 1851, and all the manufactured goods therein, evangelizing for a return to honest craftsmanship which spurred the Arts and Crafts movement.

Coincidentally,  I just started Bill Bryson's At Home, which begins with a description of that cast iron and glass wonder. The same day I resumed my online course The Architectural Imagination, after a winter hiatus, and what is the lecturer introducing but The Crystal Palace, and the impact of iron on architecture from that time? Fascinating. Well for me, maybe.


I found a paper on the history of iron smelting in Australia published by the Illarawarra Historical Society (I know, who else would read this stuff?) According to this (undated) treatise, the Colonial Government was not supportive of  early smelting  operations* using native raw materials (they lasted from 1848-1928) but imported iron as ships' ballast (hence, Rob's theory was partly correct) which was manufactured into goods in Australia. 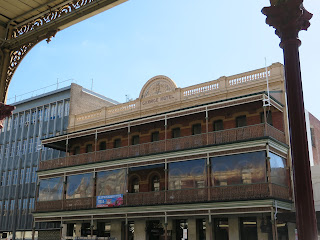 [* the 1873 Derwent Iron Works operating in Battery Point, Hobart, was one such local enterprise.]

Ballarat had better luck with gold than iron ore, but to their credit they struggled valiantly for a few years, closing in 1875, defeated by imports which were less expensive than their locally produced iron. The gold rush of 1857-57 produced a demand for upmarket decorative cast iron which lasted until the end of the century.

The graceful (imported) iron filigree of the portico over the front doors of the important Ballarat Mining Exchange might have been an affront, were it not for the ridiculous amounts of money the gold rush brought to that city. More later. 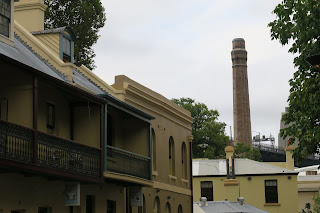 Some writers call these boom style terraces. This particular finely restored terrace is in The Rocks, Sydney. Once workers' housing, its residents now include gallery owners and high end rentals. The Terrace has generated a lot of interest in heritage circles. 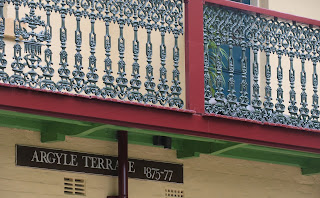 Of the tiny L-shaped workers' cottages which line old suburban avenues and dusty small town streets I didn't manage to grab a sample (as I typically had my nose in a map, my eyes scanning for street names while in their neighbourhoods.) This simple example is in the recreated Port Arthur Historic Convict Site, a World Heritage Site in Tasmania.


Fell for this cottage on Smith Street in Lorne, on our way to Teddy's Lookout, over the expanses of the Great Ocean Road. It's a guest house now. Pick me!


Posted by Ancestral Roofs at 2:18 PM