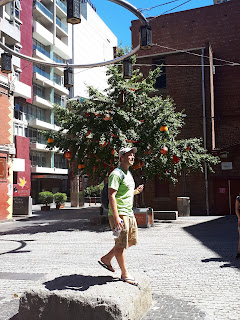 It's not just me. Not just us. Melbourne, for the seventh year in a row, was named most liveable city in the world in 2017. See here.

We loved the tree-lined downtown streets, the trolleys, the fabled hook turns (well, given we were pedestrians, and our balcony overlooked both a park and a busy right-turn over a trolley tracks intersection which provided loads of entertainment, they were good,) the topography, the parks and botanical gardens, the historic precincts, the river-side walks and cafes. The immense free public spaces of Federation Square. Did I mention the coffee?

But even the most jaded visitor would have been swayed by our two guides, the day we joined a free three-hour walking tour of the CBD. Their local knowledge, their enthusiasm, their friendliness and easy patter - and their Melbourne boosting - made being herded around the streets with two dozen 30-something tourists, a delight. Here are some walking tour guides should you be motivated into some arm chair travelling yourself.


We followed the admonition of the old city website to "look up past the awnings" (for sadly, many of the jazzy store-fronts were unsympathetic, if downright inimical, to the c19 facades rising above them. Invariably, parked cars added nothing good.) 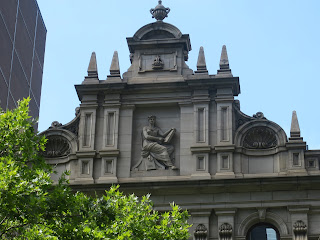 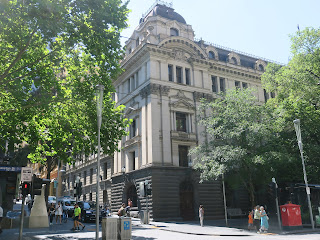 Melbourne became known as Marvellous Melbourne during the booming days of the gold rush in Ballarat and places north. By the 1880s Melbourne was larger than most European capital cities, with turrets, towers, domes and spires rivalling the best of them. Within a decade the whole thing crashed, banks and stockbrokers lost their nerve, many suffered great hardship.

Here's a neat little website offered by Museum Victoria, which places the short-lived gold boom into the city's history. Limited to a few  short years, the elation waned, but the over-the top structures built by boosterish Victorians stand to tell us their stories.

There's a bookful of them - the National Trust Guide Walking Melbourne. This is a sample entry on the Princess Theatre. I'm dying to get my hands on this book somehow.

The Royal Exhibition Building was built in 1880 in the era of Great Exhibitions (think Crystal Palace, the 1893 World's Columbian Exposition in Chicago.) Melbourne's palace to progress has the distinction of being the oldest survivor of the Great Exhibition Era still operating as an exhibition hall. (When it's not been standing in as an examination hall for generations of nervous students.) It stands in the wonderful Carleton Gardens.


Here's a useful Melbourne city planning website. Okay I can't think of anyone besides me who might use it, but don't want to lose track of it, so I'll store it here. 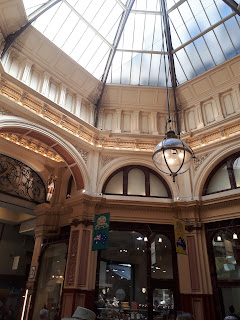 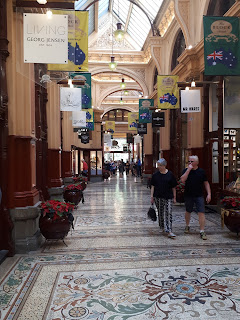 The Block Arcade means different thing to different people. Billed as "the place to shop and be seen" it is also "one of the finest examples of a nineteenth century shopping arcade on the planet." (link) If chocolatiers, an historic tea-room or high end shops don't appeal, stay for the marble mosaic floors, stone carving, and glass domes. Jaw-dropping beautiful. 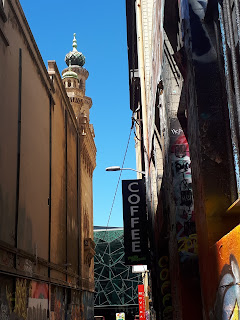 If you should wish to enter the fray into which this laneway leads, here's a portal thanks to Streetview. In my on the fly photo you'll see a nod to Melbourne's noted street art, one of the ubiquitous invitations to coffee, and a peek at Moorish 1929 Forum Theatre (formerly The State Theatre) facing off with Federation Square across Flinders Street. Melbourne in one.

I've discovered a lot of great sites while researching this post. Raaer99 is a prolific photographer of Melbourne (and nearby Ballarat) buildings. Here's his Flickr photostream.

And should you not agree with my selection of favourites, here's Culturetrip's 'most impressive' list for reference.

And who knows, maybe I'll go back one day to discover a new list of favourites?


Posted by Ancestral Roofs at 2:13 PM