I believe we made the woman's day. We ventured into the tourist information centre in Oamaru, South Island, NZ to inquire about a heritage architecture walking tour guide. She bustled off to locate some photocopied pages, stapled snugly for convenient browsing in a brisk wind. It appears the tourism powers that be had stopped printing the guide, but she had persisted in photocopying the sheets for just such a moment. She was vindicated.  We were set. Gleaming white Oamaru was about to reveal her stories.

Oarmaru is uncannily white. It reflects the sun like those iconic Greek villages. The imposing c1865 - 1885 civic and commercial buildings seem to glow from within. At its heyday Oamaru was known as 'the Whitestone City.' Today it's considered "New Zealand's most complete streetscape of Victorian commercial buildings."

Oamaru was first settled by Europeans who identified its uncannily open terrain as appropriate for sheep grazing. Bad news, no trees for building. Good news, the discovery of locally quarried limestone. Shipping from Oarmaru's (not natural) harbour created grain and wool wealth from the 1860s, and the harbour precinct expanded handsomely. Hotels and banks and customs offices were built of the impressive white stone. I find it fascinating that more pedestrian grain and wool stores and warehouses also aspired to architectural splendour. 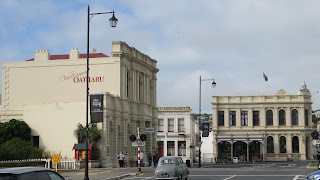 When only classical would suffice. How to communicate the solidity of your banking house? A pedimented portico would do nicely.

The former Bank of New South Wales  was converted to an art gallery in 1983. 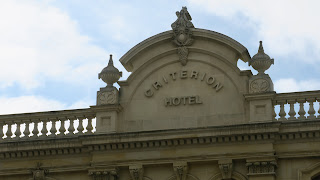 The Oamaru limestone was said to be extremely easy to carve, which explains the incredible complexity of the building facades
(that and the Victorian penchant for overdecorating...) 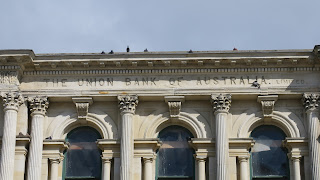 Over time, the importance of Oamaru port dwindled, and it closed in the 1970s. The city has expanded to the north, sparing the port district the demolitions and commercial sprawl associated with progress. 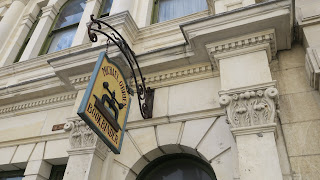 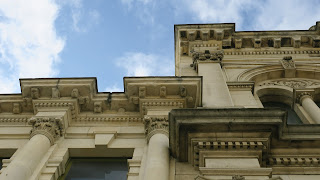 Today the town's c19 architectural treasures are the perfect fit for a new economy of tourism blended with traditional crafts and preservation dedication. The Oamaru Whitestone Civic Trust is committed to preserving the Victorian precinct and making it a worldwide destination. From the buzz in the streets, town square, galleries and workshops, I'd say they're having success.

Oh, and elegant Oamaru is also the (self-proclaimed) steam-punk capital of the world! For another visit. You can have a read about this unlikely pairing here. Or why not start at the steam-punk HQ and have a wander. Loved Oamaru. Hope to revisit.


Posted by Ancestral Roofs at 4:31 PM