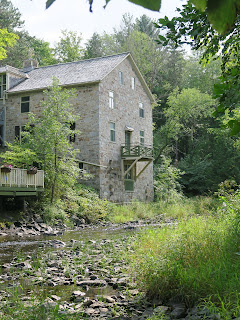 R. Tail McKenzie. Not a household word, but a Canadian (Almonte, yet) born sculptor of international reputation. Sounds like a Renaissance man to me. Mackenzie was an "educator, orthopedic surgeon, author...well known for rehabilitative methods he developed as a medical officer during WWI."*  Medical advances were one of the few positive outcomes of that conflict; McKenzie was a pioneer in reconstructive surgery and physical therapy, and a brilliant lecturer in anatomy at McGill. Somewhere I read that he was forced to sculpt his own teaching models due to lack of  anatomy resources at the university.

And a sculptor emerged? 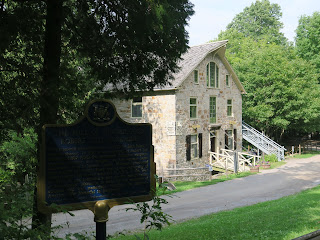 R.Tait McKenzie's story conjures a Wilfred Owen world of British public school boys on frozen playing fields, hardening themselves for future leadership roles on WWI battlefields, challenging themselves and others to greatness. A Canadian version.

Lest this playing fields of Eton analogy feel like too much of a stretch, McKenzie's boyhood friend was another heralded local boy, James Naismith, inventor of basketball. 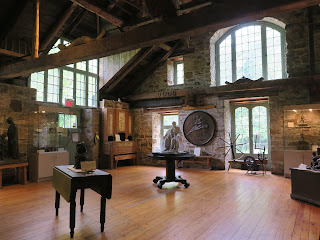 I visited McKenzie's Lanark County studio-home this past summer. No, he wasn't there to greet me, but I spent time in his presence on the magnificent second floor of the restored mill. Here is a well-curated and evocative display of over 70 of his works - originals and plaster models of commissioned works which are on display throughout the world. 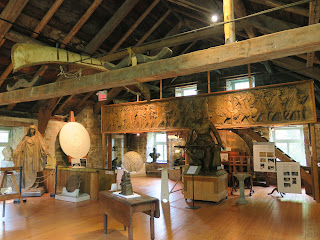 Now frankly, this heroic classical style with serene nudes and straining athletes, the stuff of  war memorials, is not my favourite. But it was of its time, and I do pay attention. This was the artistic fraternity into which Florence Wyle and Francis Loring, particular heroines of mine, struggled to gain acceptance - and make a decent living.

But I digress (not for the first time. ) 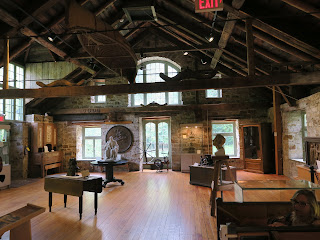 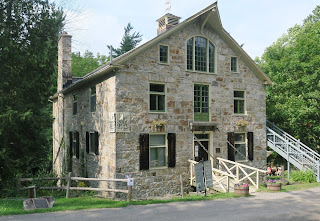 What McKenzie did that endears him to me was to search for, and find, a dilapidated mill near his home town, and restore it for his home and studio. He lived well here.

His account of the project, I Discover the Mill, is displayed in the mill. In 1931, back home for a speaking engagement, he was challenged to create a summer home on the abandoned Baird's Mill property. He struggled through thick underbrush toward the river and found an intact stone structure, ruined floors littered with ruined mill machinery. Roof full of holes. But with white pine beams 50 feet long and almost 2 feet deep which could inspire the most jaded. People of means and imagination aren't easily deterred. R.Tait McKenzie describes the place as "isolated, concealed but self-contained like the retreats of highland robbers. "

McKenzie purchased the 50 acre site, rebuilt the mill and even the ruined dam, washed away by spring ice long before. The millpond provided a swimming pool, the site of legendary summer entertainments orchestrated by his musician/poet wife Ethel O'Neil. They named the place Mill of Kintail. Kintail  is Scottish Gaelic for a spot in the Scottish Highlands. 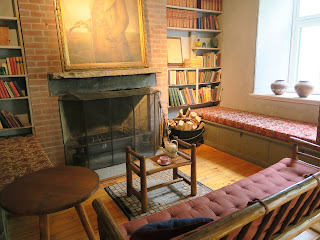 The Arts and Crafts feel of the fireplace nook, and wonderful touches throughout the main floor of the mill home, are worth the price of admission. Oh wait, there is none. The Naismith basketball museum, I left for another day. 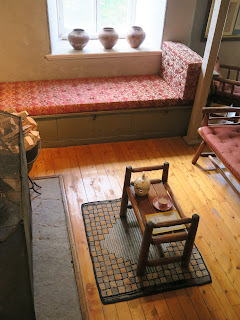 The sandstone mill was built in 1830 by Scottish pioneer John Baird, along the Indian River, tributary of the Mississippi River (the one that flows into the Saint Lawrence.) There is a bridge over the trickle, which leads one directly into the forest (where a bear warning was posted the day of my visit.) The view at top taken from the opposite bank was just about as far as I travelled into the wilds of Lanark County.

The Mississippi Valley Conservation Authority also did a fine thing, when  they created the Mill of Kintail Conservation Area. The miller's fine stone house, in ruins when Mackenzie first saw the property in 1931, near the road is now a meeting area, the mill a museum to  two native sons, Mackenzie and Naismith, and the 150+ acres bordering the river and wandering the woods is a natural recreation space - Mackenzie would have been pleased.

* The Canadian Encyclopedia
Posted by Ancestral Roofs at 2:45 PM