In my previous post about Pinhey's Point, I included this Pinhey's Point Foundation link. It outlines the proud chronology of a unique property. The 1800s were its growth years. The 1900s saw it losing ground. The last relative, Ruth Pinhey died in 1971 at Pinhey's Point. Story boards in the Pinhey manor house from that time show photos of an interior largely unchanged from the 1930s. Ruth used the once-imposing main hall as her living room; a black and white photo from the 1970s shows a humble interior, its dignity lost. Fortunately, the NCC heritage advocates realized the value of this property, and the wheels of preservation machinery began to turn.

The cool, damp windy day I visited, an intrepid group of older women, and one very senior lady, were picnicing under a marquee. Turns out the group was a  reunion, friends and relatives of Ruth Pinhey returning to pay homage to their ancestor, and to the home built by ancestor Hamnett Kirkes Pinhey in the 1820s and 30s. I enjoyed the atmosphere of the immense building, and the stories and artifacts in each restored room, always aware of the bustle of a group of women negotiating stairs (they are legion) and obstacles for their elder. She was determined to "see it all" even to the donations of children's books and toys, which had been her own, in an upstairs bedroom. 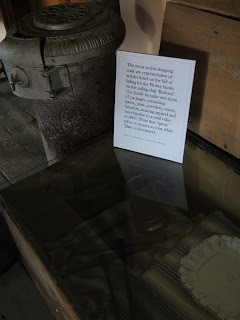 Beside the cast iron stove (of which there must have been many, judging from the number of stove pipe holes) in the 1820s ballroom is a display case with this sign: "The items in this shipping crate are representative of articles listed on the bill of lading for the Pinhey family on the sailing ship 'Barbara'. The family brought with them 55 packages containing specie [coins], plate, jewelry, music, furniture, wearing apparel and merchandise to a total value of 800 pounds."

How to make a grand entrance in the Canadian wilderness in 1820. 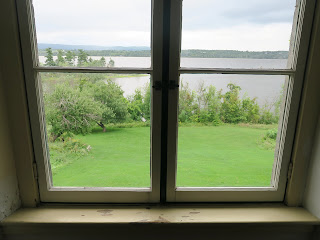 The interior of the house was spartan, but preservation efforts over the years have made it possible for us to time travel from the 1820s through the 1840s to connect  with the lives lived in this (once upon a time) outpost of refined civilization. 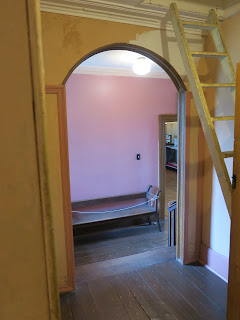 Because of the crowds, I failed to get some of the photos that would help me tell the story, like the incredible staircase leading to the dining room on the half-level at its top, where today a maze of interpretive panels tells the story of the NCC and its rescue of the Pinhey's Point property.

This view from the upstairs bedroom hall, looking back down at the doorway to the dining room, will have to suffice. Notice the deep cornices, wood floors and panelled walls. How to give you a sense of the immensity of this house, the halls and levels leading off in all directions?

Behind one, down this hall, are family bedrooms and the 'sanctum sanctorum', Master Pinhey's indoor toilet. 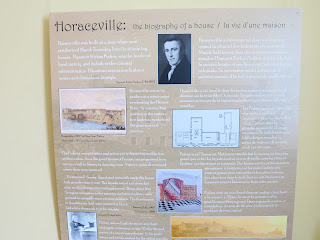 The second floor dining room's interpretive panels recount the National Capital Commission's work in the 1960s to preserve important built heritage, like restoring the 'processional route'  on Sussex Drive near the Byward Market (where once flourished Le Hibou, a popular coffee house in my uni days.) Other important projects dating from that era of Federal Government involvement include the restoration of  Watson's Mill in Manotick, the Mill of Kintail near Almonte, the Wakefield Mill (now a swanky spa) and a property I haven't (yet) visited - the Symmes Hotel.

The funds raised, the levels of government involved, the discussions which must have taken place - exhaust me. What delights is what all that work accomplished for all of us.

An enlargement of the 'Biography of a House' text panel shows a sketch of the entrance hall as it would have been in the 1860s. The pine board floor was painted in black and white checker-board, to simulate marble. The illusions of grandeur continue with faux graining of pine interior doors and mouldings.

Notice the grand staircase leading up to the dining room. The doors to left and right hid corridors to the kitchen, pantry and other service areas. The portieres would have been especially helpful whenever the hosts flung open the north-facing front doors to guests, admitting wintry winds off the Ottawa River. 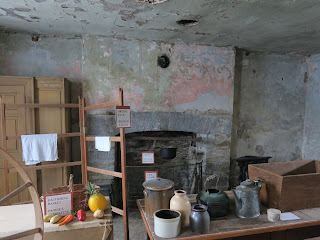 These are taken in the kitchen in the 1840s wing at Pinhey's Point. This was the second kitchen.

The kitchen standing to the west, today a picturesque ruin, was the original which became the domain of son Horace Pinhey's wife, when the senior Pinheys moved to this (ahem) new kitchen.

Although the restoration is incomplete, the removal of more modern elements has taken it back to basics. The massive cooking fireplace and deep window sills bring the stone-built story indoors. 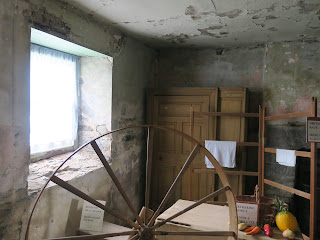 To theleft of the centre entrance hall was a study which became a dining room in more recent years. 'Recent' is a relative term. The dark patterned wall-paper originated in Montreal somewhere between 1900 and 1935, the exoticed linoleum flooring was contemporary. The dull day outside contributed to the delicious 'brown study' effect. 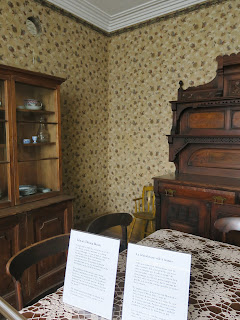 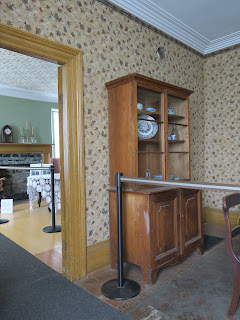 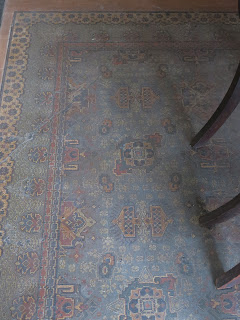 The former study seems like the right place to provide a link to Horace Pinhey's journal, which he kept from 1856 to 1865. These entries make fascinating reading, if the endless work of running a large farm and estate in the mid 1800s appeals to you.


The east side of the house, where this room is found, was deeded by the elder Pinhey to daughter Mary Anne (the artist of the watercolour in my previous Pinhey's post.) She did not live here long, ceding her half of the house to brother Horace, upon her marriage and departure for Ottawa. 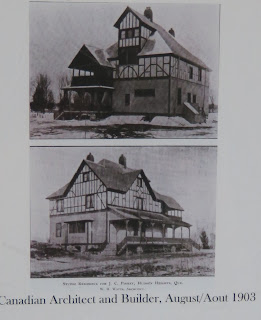 An artistic gene appears to have run in the family. The parlour features an exhibit of (quite lovely) paintings of Hamnet Pinhey's grandson John Charles Pinhey. His female portraits make me think of John Singer Sargent. The massive quarter-sawn oak rocking chair from the Black Forest was rescued from the fire which destroyed his eccentric stick style studio-residence at Hudson PQ, in 1921. 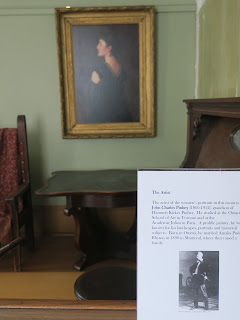 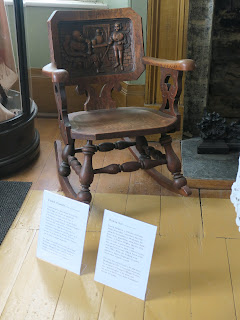 Husband, who was in the city the day I travelled to Pinhey's Point, has just read yesterday's post. A return visit to this incredible site are in the works. Maybe next time we'll have sun.
Posted by Ancestral Roofs at 4:04 PM