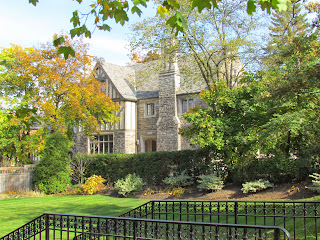 Why would bankers, industrialists and university professors of the 1920's and 30's want to emulate the Medieval era in their choice of domestic architecture?

Indeed, I ask John Blumenson, he of Ontario Architecture (Fitzhenry & Whiteside, 1990) and my travelling companion in 'Journeys with John' here in March of this year, or January 2014. 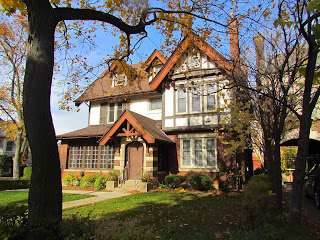 We turn to Mr. Blumenson to learn about the architectural style inspired by British precedents and known broadly as Period Revival, or more specifically as Tudor, or even Elizabethan or Jacobean Revival or that synthesis of inspiration, Jacobethan.

The English route to this revival is the rural manor houses and cottages of the Tudor period..."with the occasional high-style Gothic feature...the Tudor arch" or a "combination of Medieval forms with Classical elements reflecting the Elizabethan and Jacobean periods." 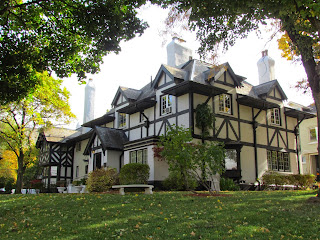 Period revival "refers to those twentieth century designs that reflect..this transitional era from the late Gothic to Tudor to the Jacobean periods."

We are talking about an era from 1485 - 1625! The year 1485 saw the accession of Henry VII, then Henry VIII and Elizabeth I reigned for most of the era from 1500 to 1603. It was the era of Shakespeare and the Globe Theatre, Henry VIII's nasty marital problems, the dissolution of the monasteries, the English Reformation. Life was improving, but education and sanitation were still for the few.

For most, homes were small thatched or tiled huts. Walls were made from timber, or wattle and daub, or brick, stone and tiles. Daub was painted white with lime-wash, and wood was painted with tar to stop rot.  The wavy wooden beams were cut by hand, bricks were handmade. Upper floors extended outwards to create an overhang (called a jetty) - "gardez l'eau" comes to mind.

Glass was expensive and hard to make, so small panes were held together with lead lattice. Tudor chimneys were tall and thin, or twisted, and decorated with cut brick designs. 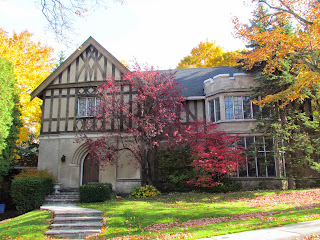 So why this love affair with a time of "nasty, brutish and short" lives? 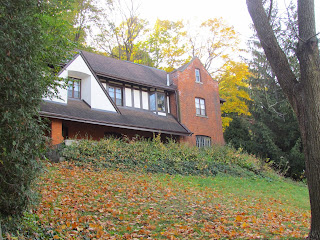 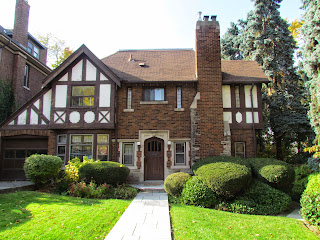 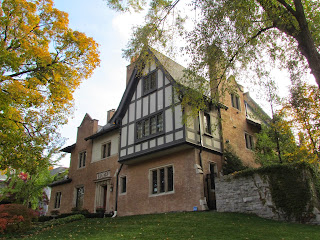 Why indeed? I had to turn to another source, A Guide to Canadian Architectural Styles (Maitland, Hucker & Ricketts, Broadview Press, 1992) for a partial answer.

The authors suggest "a nostalgia for the past and an admiration of things British" and its "association with domesticity." Ironic that this enclave of exclusive homes in early twentieth century industrial giant Hamilton should express such admiration for the "pre-industrial, medieval crafts." 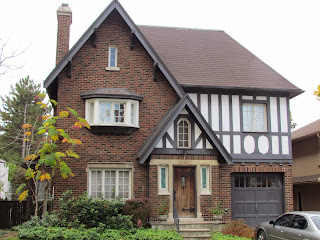 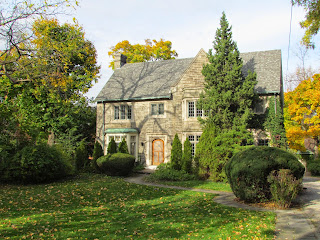 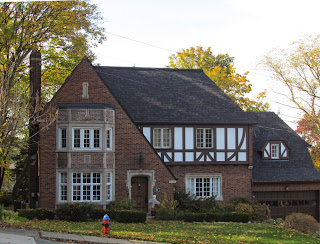 Each of these exquisite homes is within walking distance - I visited them all one sunny late fall afternoon in October.  They can be revisited via Historical Hamilton's Durand site.