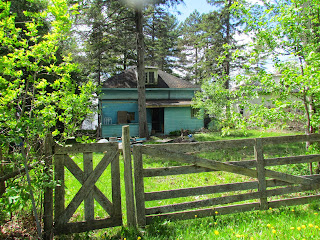 I have been going to the lake a lot lately, researching a story. I have enjoyed several wanders, and conversations with some super people. 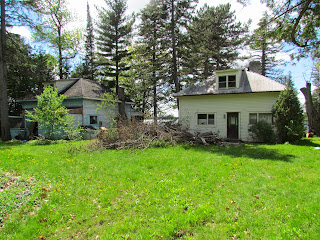 A recurring theme of our walks and talks has been regret at the loss of the 'old' cottages. Seems we all want something more now. Cottages used to be small; life was outside. And simple. Four walls, a roof, a screened porch. A few chairs around the yard. A place to clean fish and tie up a rowboat. An outhouse. A firepit.

Another change at 'the lake', in addition to the proliferation of a new generation
of cottages, is the transition of many early cottages into year-round homes. That usually means adding to/modifying the old cottage beyond recognition, or (with great regret, when the original cottage owners make the decision, I'm guessing) demolishing and replacing it with something sturdy that can be insulated, ensuring any number of creature comforts - most notably water pipes that don't burst in winter, and heat, blessed heat. 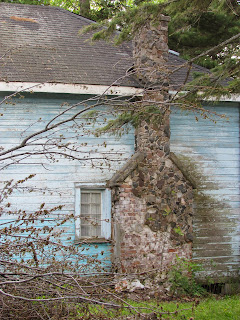 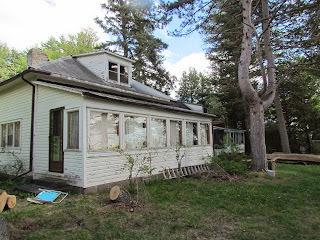 A lake-dweller who spent childhood summers around the lake took me to see a few of the originals. These two in particular have a story to tell. Their so typical cottage architecture, the simplicity of the surroundings, and their state of near-collapse tell a story which has an ending, coming up quickly. 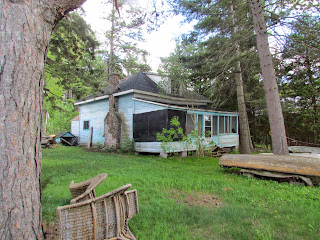 We discovered a hand-built table that had seen lots of family meals and crokinole games.
An icebox that held plenty of potato salad and fried chicken in its day.
The shore road is home to a number of new modern homes. These lots are likely next to sell, their cottages and cottage stories lost forever.
Posted by Ancestral Roofs at 12:41 PM