Nice Day for It 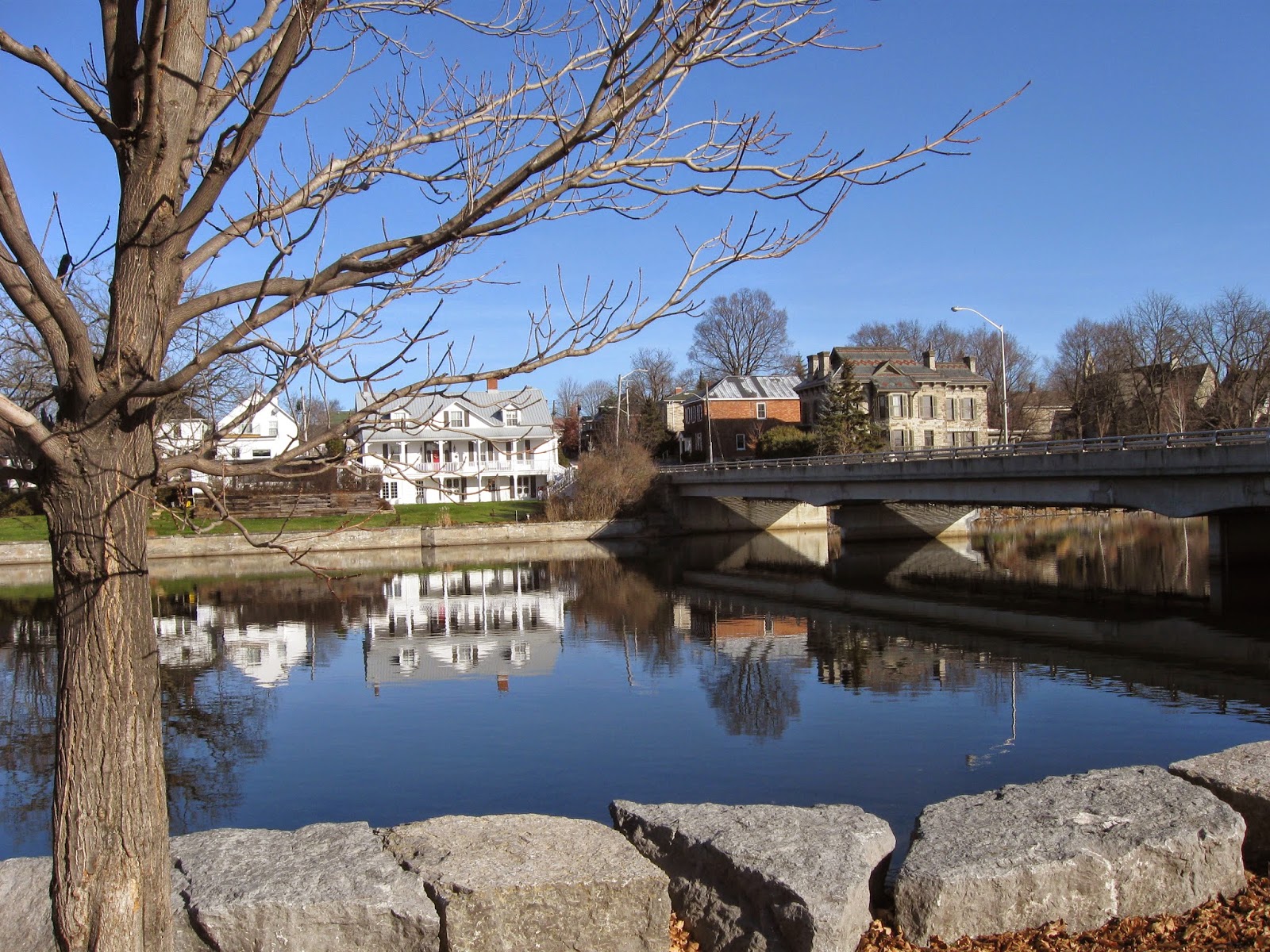 One crisp November day a few years back, our small family travelled to Almonte (bundled by amalgamation into Mississippi Mills along with Pakenham and Ramsay - a fact the locals likely ignore), to support each other and say farewell to our aunt, mom's sister, who was being buried that day.

In typical Pierce fashion, learned at our father's anxiously twitching knee, we arrived too early and headed to the nearest river to pass some time.

I've just come upon this file of Almonte photos (a limited selection, as we made only one stop before heading to the church) in my search for images of great town halls for a post. But because the day was so bright, and the Mississippi so picturesque and the riverfront park so appealing, I will post them here as an antidote to a series of dull posts this week, all arising from cloudy day visits.

By dint of a bit of streetviewing, mapquesting and googling, I determined that this wonderful white riverside house is the Menzies B&B. This stunning Anglo-Norman structure was the 1850 home of Jonn Menzies, merchant and bureaucrat. The frame house was constructed over an earlier stone one, and contained the store. At the end of the property was a blacksmith shop. It looked across the river, not at the wonderfully restored Gothic Revival town hall, but at a very workmanlike Shipman's sawmill in this (then) busy wool manufacturing town. The B and B's website has a pre-1880 photo of the mill with the house in the background. Looks much more restful now.

The bracketed stone house with polychromatic roof tile, to the right of the white house, is also an inn, Almonte Riverside Inn and Kitchen. Sounds delicious, as does the house. 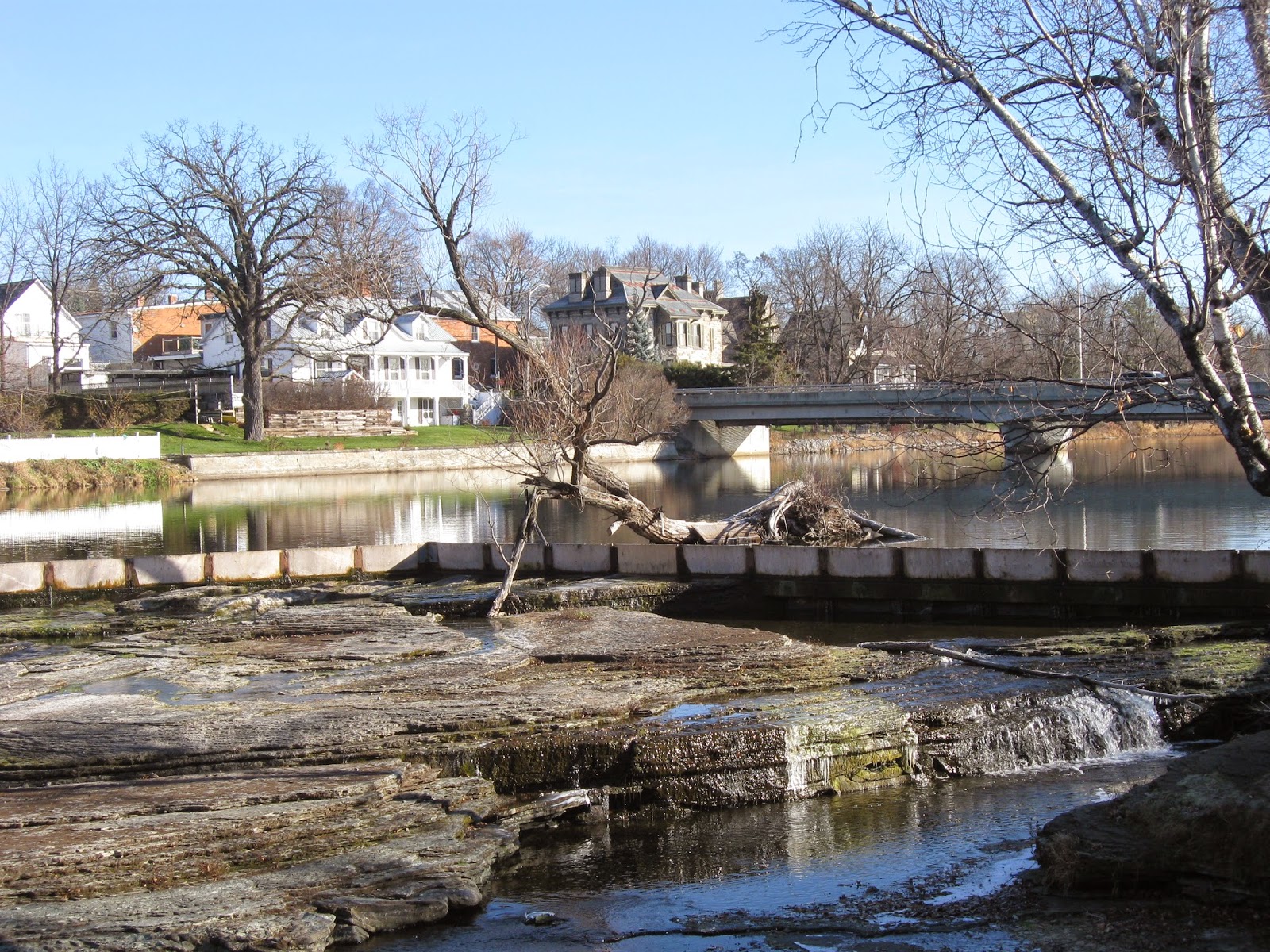 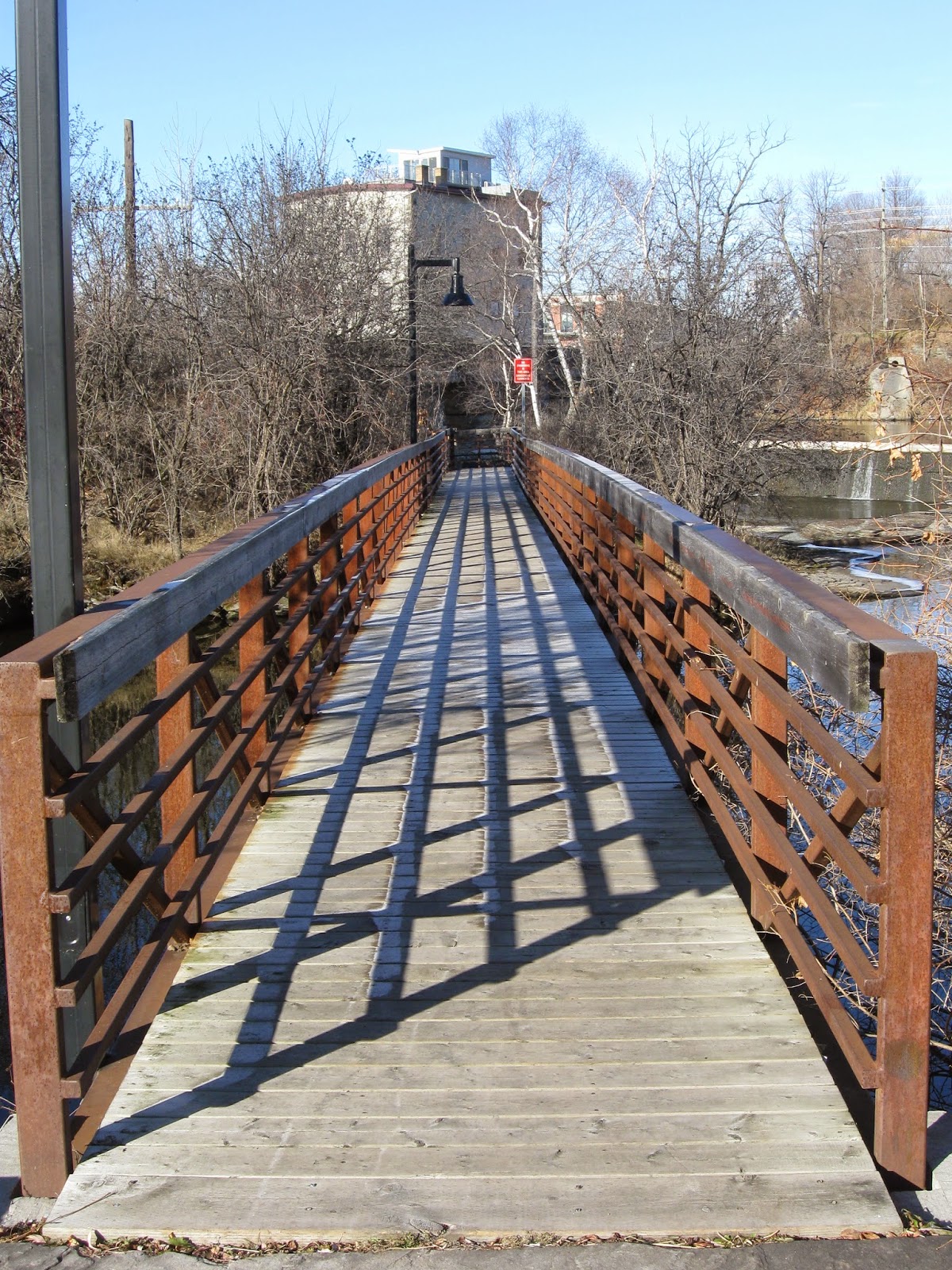 An Almonte history site explains that this quiet village was known as 'the Manchester of North America' *. By 1900 there were seven woolen mills in operation. The site's mention of "massive mill owners' mansions" suggests a longer road trip may be in our future. By the 1950's the wheels were off the woolen bus; the early 1980's saw the final mill closure.

* This was a familiar boosterish boast - just last weekend, while researching Hamilton's Victorian industry, I learned that city was once called Canada's Birmingham. Proudly.

This inviting walking bridge carried tracks at one point - an 1863 map shows the Brockville and Ottawa Railway crossing the river there. At the other end is the Almonte Flour Mill, tidied up and used as upmarket residential.

I wasn't able to find much information about the lofty old town hall. Macrae and Adamson used it as the cover girl for their 1983 work on courthouses and town halls, Cornerstones of Order, but didn't devote any text to it. It's listed in Town Halls of Canada (Parks Canada, 1987), where I found a reference to an extensive LACAC report written by Susan Algie. 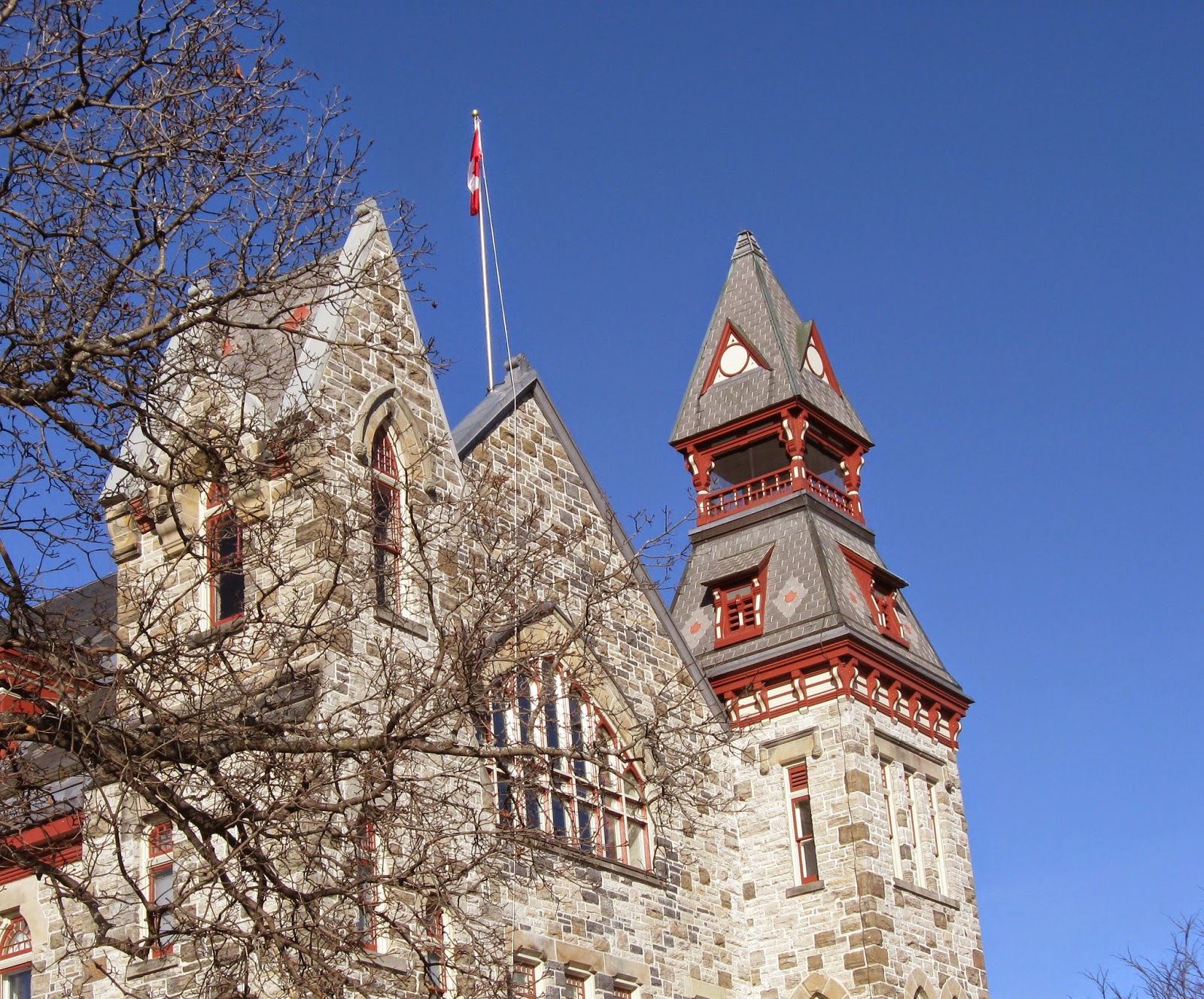 Almonte town hall was built to accommodate a fire hall, police offices and a large meeting hall - the multi-purpose town hall type. It was made redundant by 1998 municipal amalgamation, and now houses a celebrated performance and function venue.

But oh, in its day, it had bragging rights. Gothic Revival imperious, with polychromatic roof slates, a kind of Scottish baronial feel to the south facade, and that tower - mansard roof, bracketed, multi-coloured painted brackets, and stick-style open tower. Stonework for which the area is famous - check out the window hoods on the massive Gothic window. 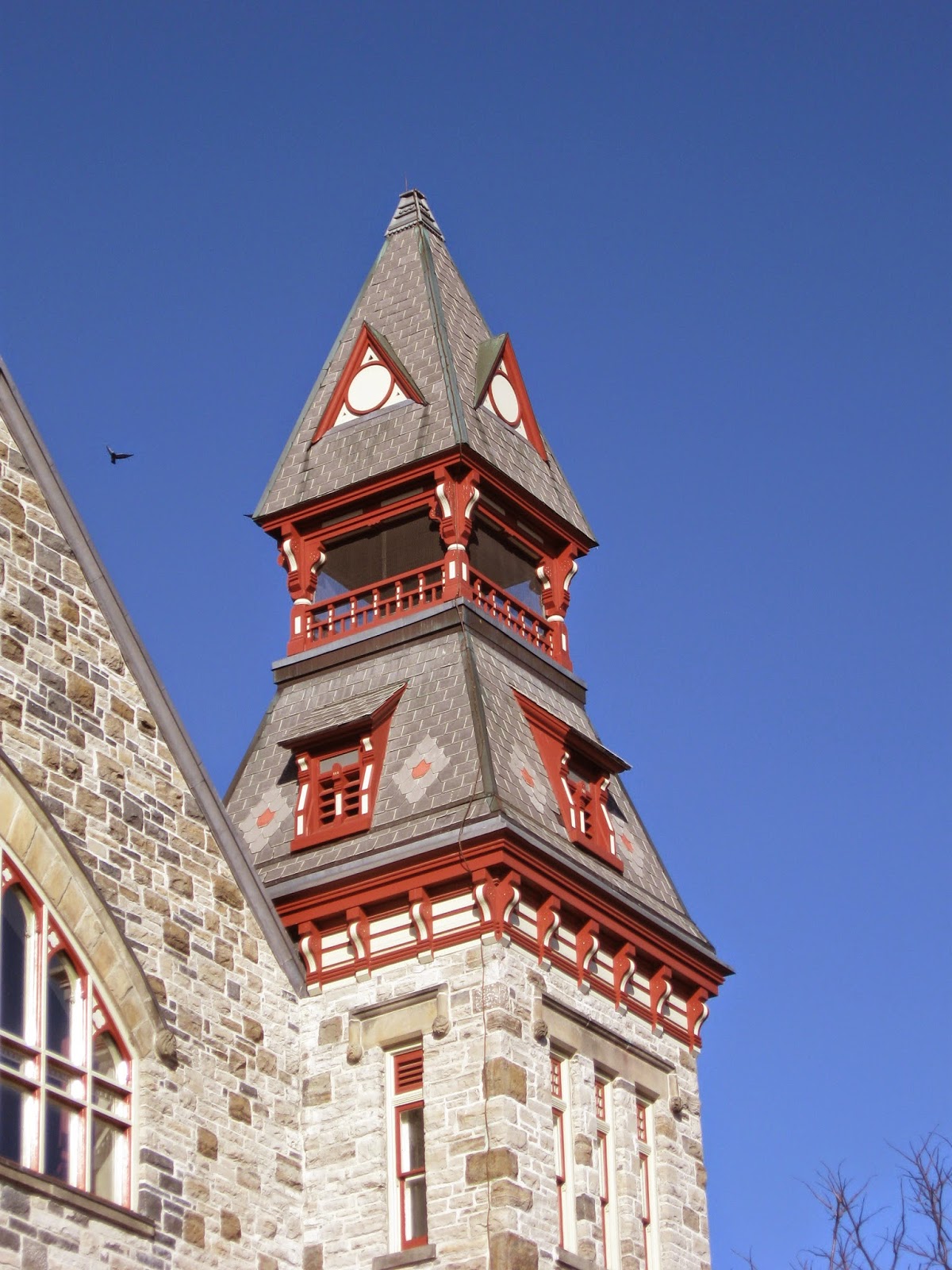 There's a fascinating town history website, which has a great collection of old photos, and an explanation of why the town was named for a Mexican general. You will want to know.

And there's a book. Isn't there always a book?

Lanark Legacy: Nineteenth Century Glimpses of an Ontario County, written by Howard Morton Brown, was published by General Store Publishing House in 2007. The sample I found online is filled with tantalizing historic photos. A ticket to time travel, once again.
Posted by Ancestral Roofs at 2:55 PM