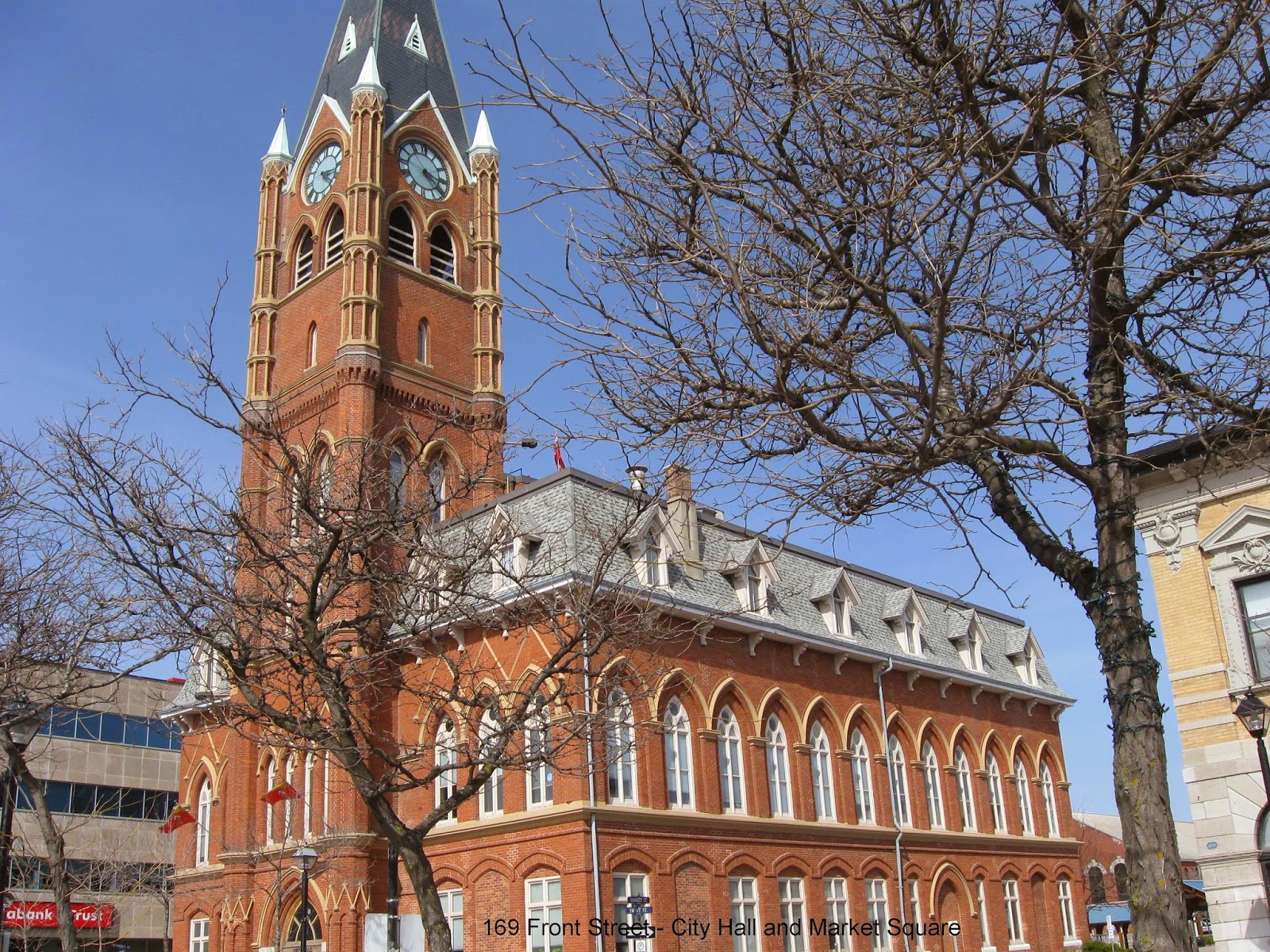 A friend sent along a link to a newspaper clip recently, about doings at our city hall. Now I'll admit, I usually turn a deaf ear, as council wrangling is not my favourite way to waste time. But something about Bev's note suggested I have a read.

And this was good Quinte News! I learned that our Belleville City Hall (built 1873, retrofitted 1988) has won an award for the visionary project which modified the building in 1988.

And in this city known for its demolitions during the progress years, this story is a terrific story of  the adaptive reuse of a heritage building. 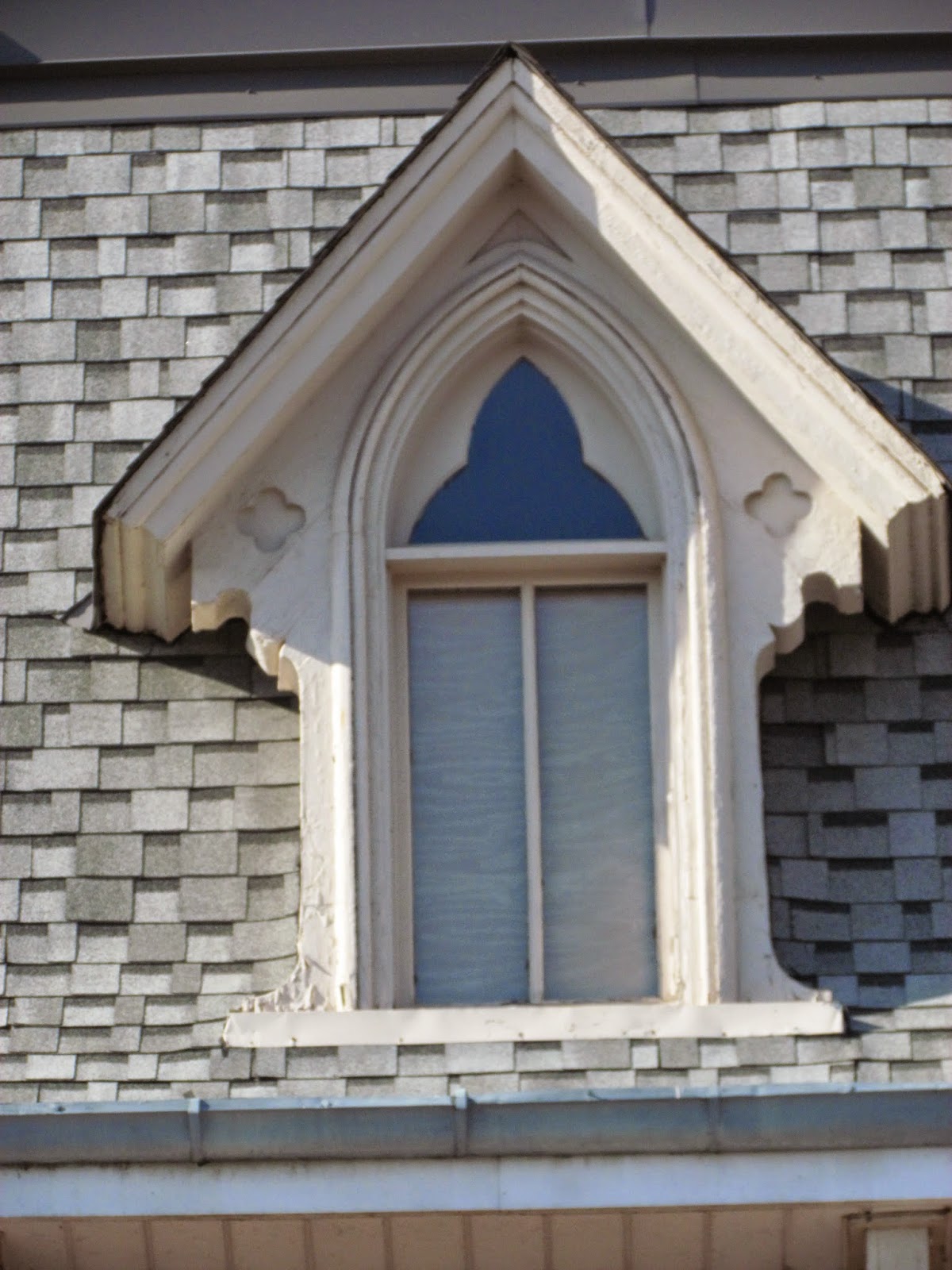 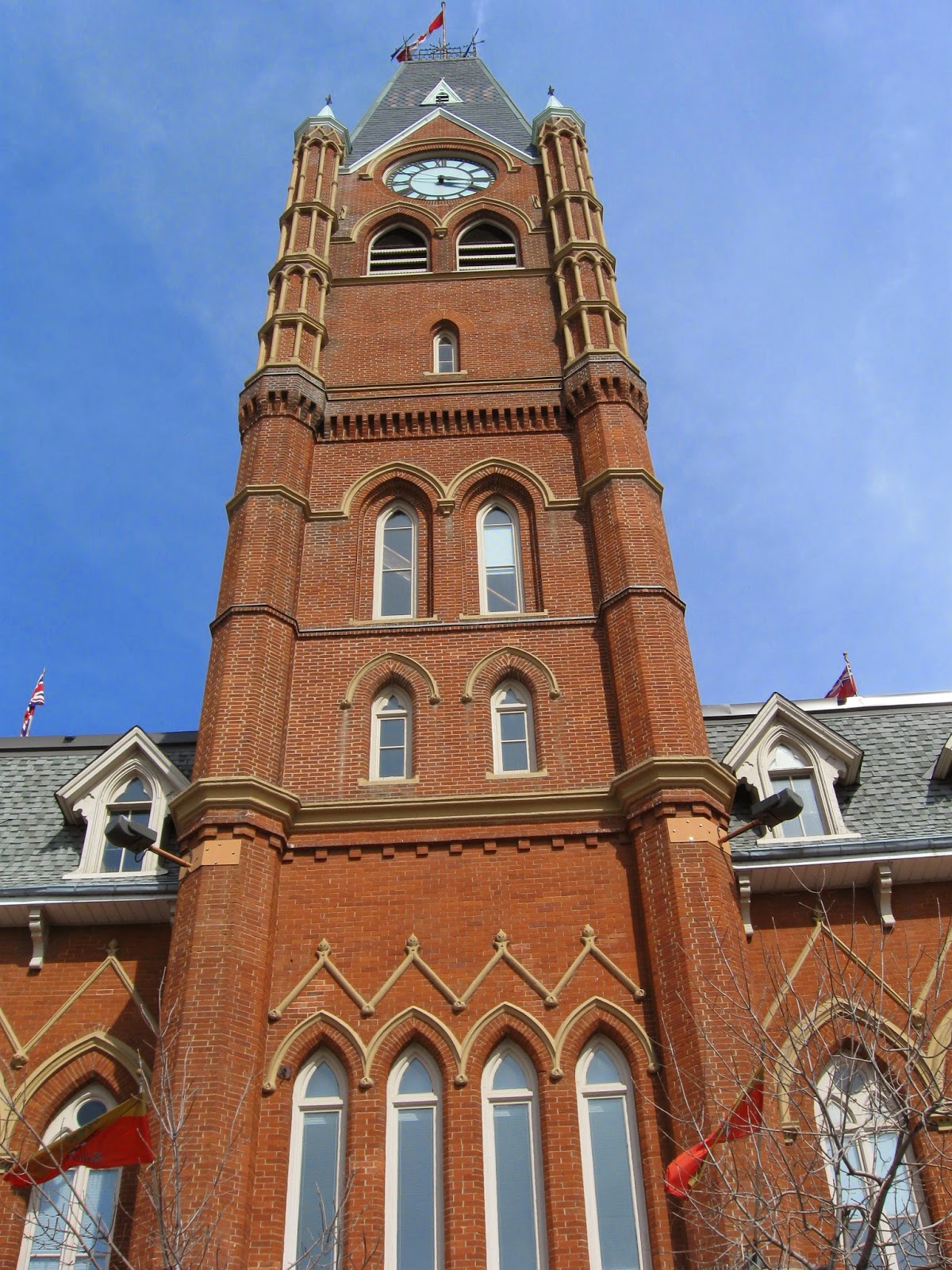 Belleville City Hall (and architect William R. White) earned this recognition from the Ontario Association of Architects for a wonderfully creative project which saw the building's two interior levels, which had become woefully inadequate for an increasingly complex municipal bureaucracy, expanded to four. I don't have any interior shots, but  the City Hall website contains a terrific 20 minute documentary featuring interviews with Bill White, former mayors and local historian Gerry Boyce. At about minute 12:00, you can see the reworked interior, capitalizing on the amazing original roof trusses, and lots and lots of light. 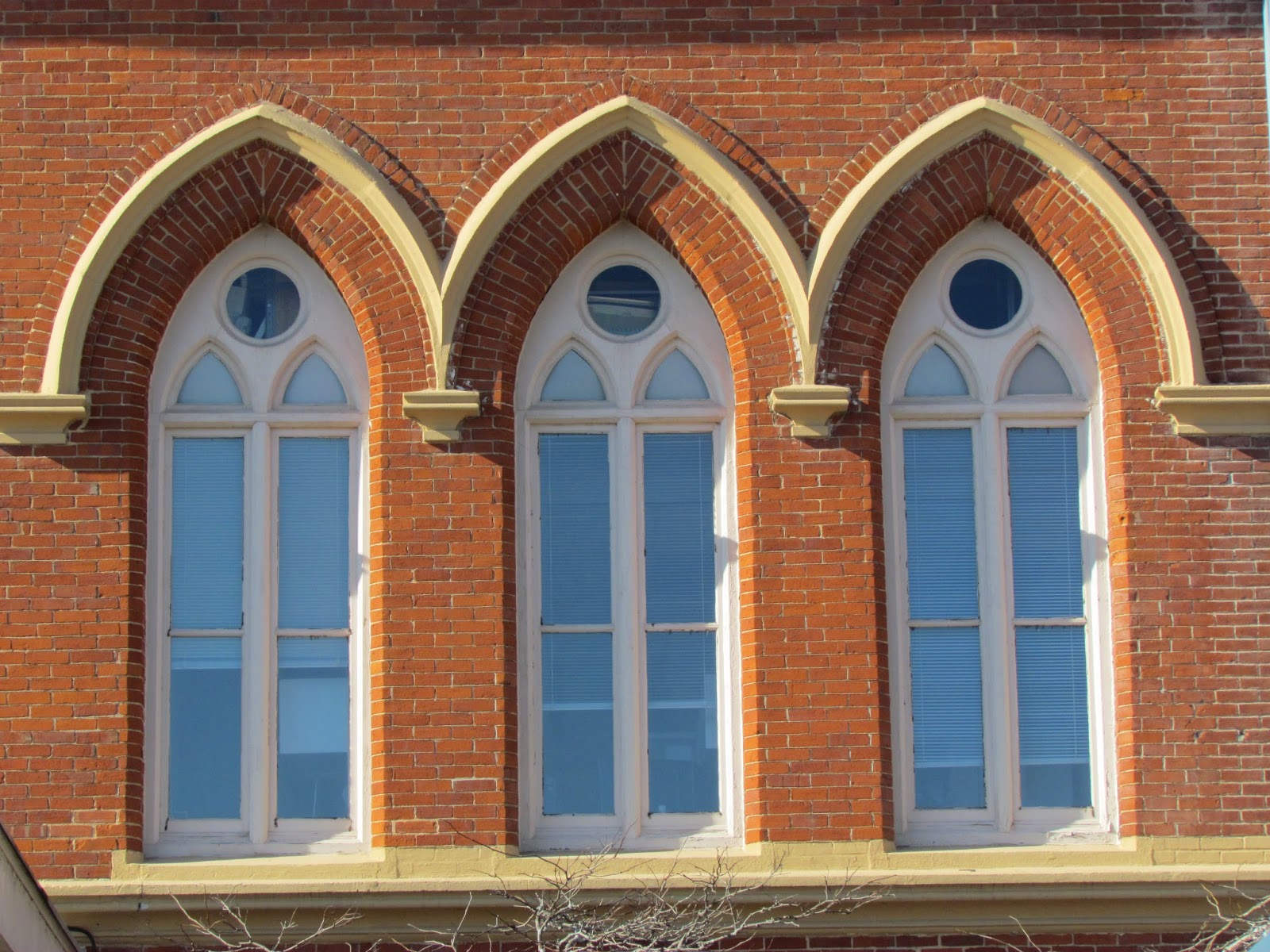 I particularly like one of the meeting rooms, where we gathered for municipal heritage committee meetings, which has old brick walls and knee height windows like portholes, created from the top of the Gothic arched windows. Interestingly, Belleville's choice of Gothic revival style for its city hall was unusual; most municipal architecture is based on Classical precedents - the thought seems to have been that all those columns and pediments added a certain dignity to town business. But I think the building, and especially the towering clock tower, does the trick. 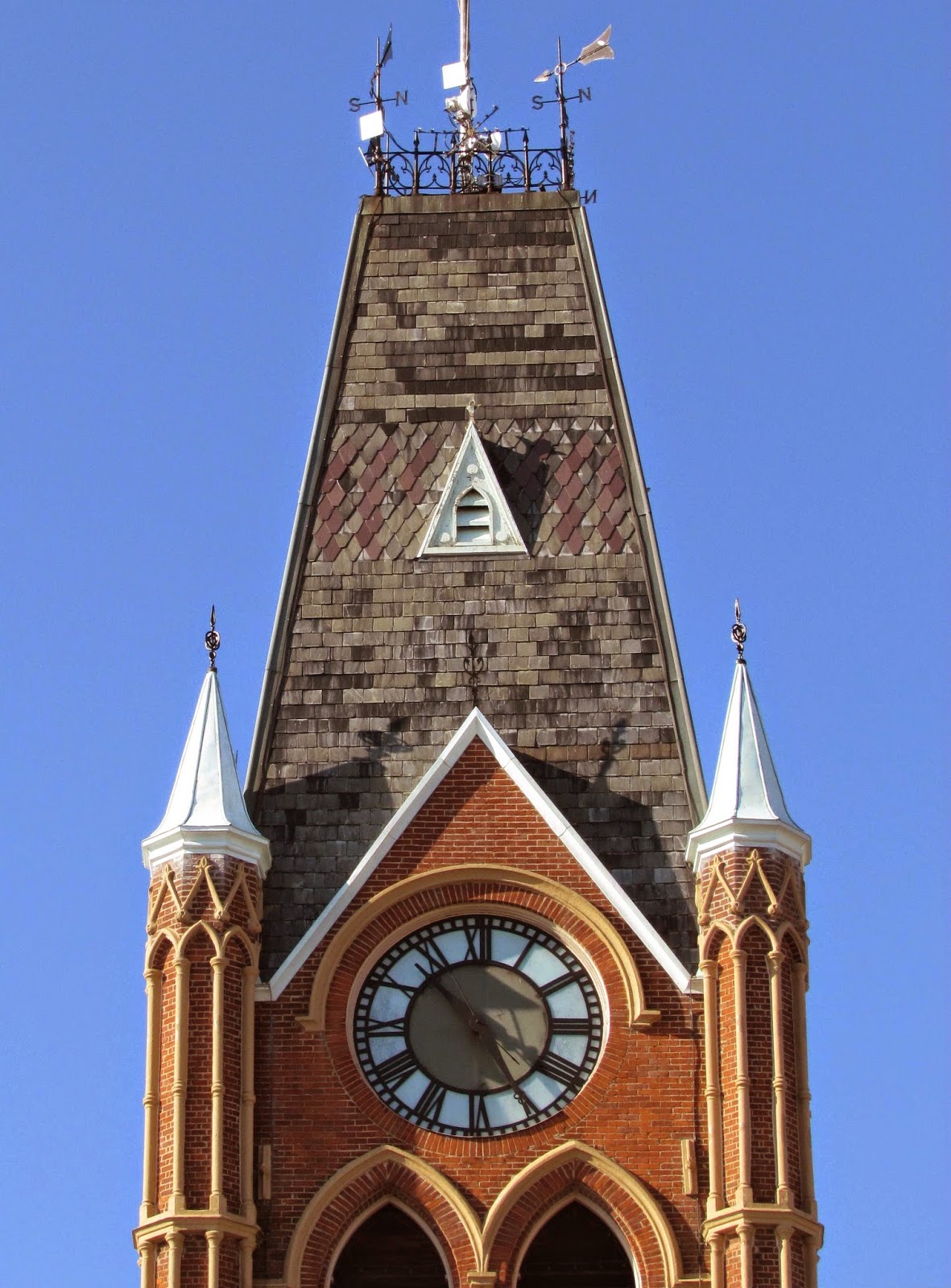 I'll leave you with the imitable Marion Macrae's thoughts on the building, from Cornerstones of Order: Courthouses and Town Halls of Ontario 1784-1914: "[John] Forin's turn to build in the Gothic style came in 1872, when a town hall was planned for his home town, and an overgenerous posterity has given him credit for the design as well. John Forin was a good contractor with many sound buildings to his credit, but the designers of the few Gothic public buildings in Canada West were a more unusual group, and John Evans, the actual designer of the Belleville town hall was not an exception to that rule.

Canadian-born John Dunlop Evans was an engineer-architect and surveyor by training, but an entomologist by choice. He is better remembered for his discovery of a minute insect, whose very long name terminates in the complimentary "evansii", than for the design of the Belleville municipal building and its surprisingly regal,Gothic furniture. Forin, watching over the construction of the red-brick Gothic box - with its un-Gothic bell-cast mansard roof - was moved to protest the shortness of the tower as planned. Public opinion swayed with him and the town council asked Evans to lay aside his butterfly net and give them a campanile worthy of the county town of Hastings. Criticized for designing council room furniture that was too elaborate and a town hall that was not fine enough, Evans went back to the drawing board, and in the spirit of his godfather, Tiger Dunlop, gave them more than was expected. He strengthened the  lower stages of the Belleville clocktower with octagonal buttresses, and in the newly designed upper stages the buttresses were clasped by blind arcades of little Gothic columns, and capped by candle-snuffer roofs. Above the four clock faces the tower rose steeply to a dizzy platform garnished with a cast-iron railing and four weathervanes. The clock faces were gaslit so that all might see and bless the corporation. Belleville's sparrows were grateful too, riding happily on the big wooden minute hands until by sheer weight of numbers they defeated the driving mechanism." (pages174-5)

Posted by Ancestral Roofs at 11:53 AM