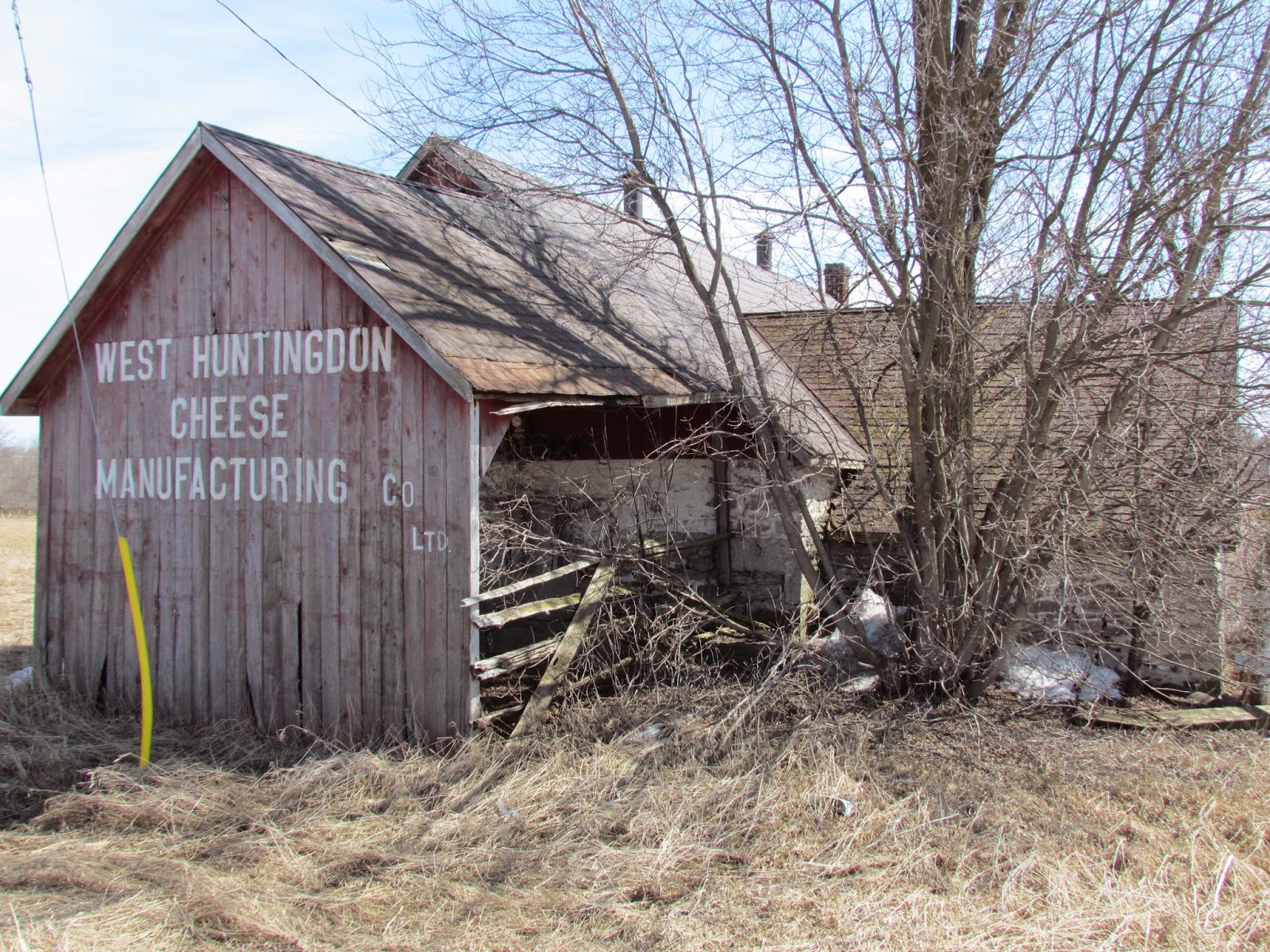 I grew up on cheese.
Cheese appeared, as did bread, at every meal, even those ample Sunday dinners at Grandma Striker's. Apple pie and cheese, oh yes.

Strikers were a 'cheese' family; ancestor Isaac was one of the county's first cheesemakers.
As a little girl, I remember one visit inside the cheese factory nextdoor to Grandma's - didn't care for it. Cold, dripping wet, smelled like fresh curd. The factory was in family hands until 1910, and closed finally in 1956.
Today the plain building is fancy Exultet Winery.

Even after the cheese factory closed, the Striker grandfather and uncles belonged to the farmer's cooperative which formed Black Creek Cheese Factory (yes, today's marketing grew it into a River) in the 1870's. Their website tells the whole story, so I won't go on, except to note that the place is still farmer-owned, and uses the old-fashioned open vat method and natural ageing to make cheese. It's nice to see something so darned wholesome do so well. 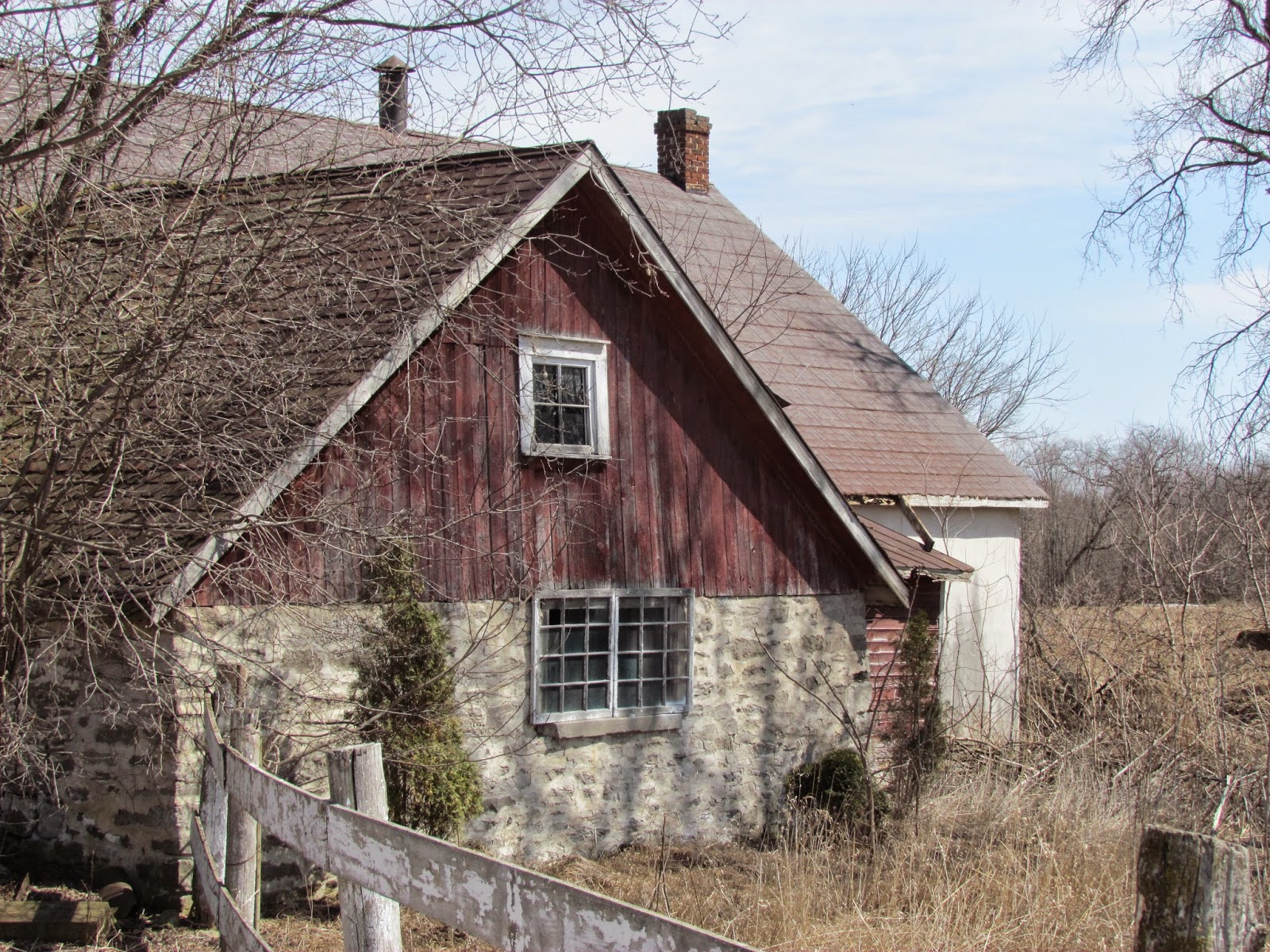 Early on, dad shipped out milk from our small dairy herd. I remember large cylindrical milk cans and smaller curvy cream cans left on the milk stand half-way to the barn. Underneath, in the summer's lush weeds, my playhouse.

But it was just the other day that I finally "got" cheese. Somehow, it was coming upon this building on a trip down Grills Road, Hastings County, winding my way cross country from Marmora, that finally connected me to the story. 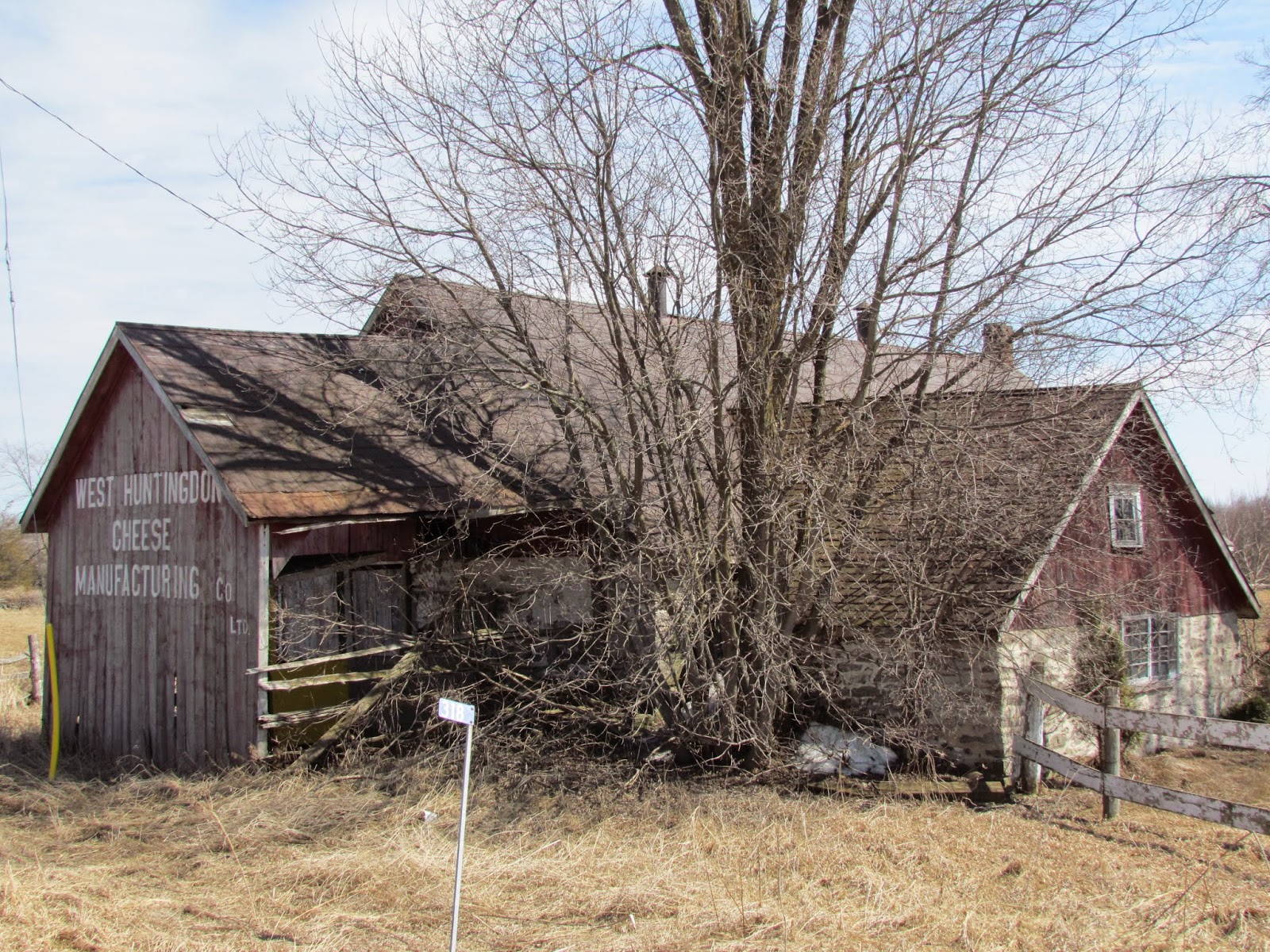 For the building with its tall pitched roof (for ventilation, I've read) and the loading dock with canopy for unloading cans from farm wagons, told me the story.

Of farmers on isolated small holdings taking their milk, by horse and wagon, long distances to have it made into cheese.

Then the building of a factory in one's own rural community,  the convenience, the pride in building one's own plant close to home - of getting ahead in the world. 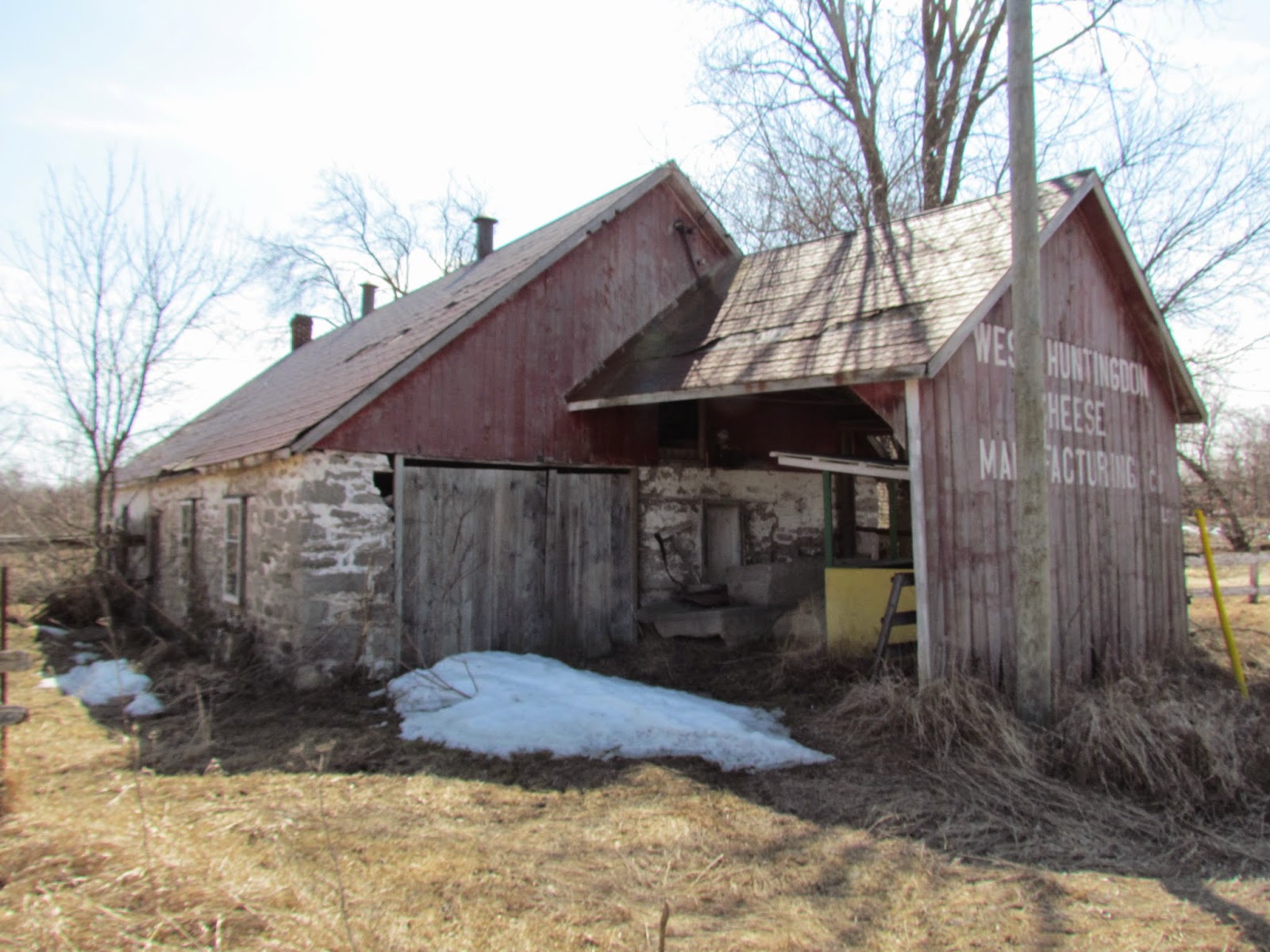 Now of course, 150 years or so later, they're mostly closed.

The buildings still stand in lots of former communities. Mountain View, Prince Edward County (c.1900-1970's) is one I pass often. A bit of dignity remains in its stucco, fancy lintels and quoins. I'm sure I recall it being in operation. Notice the old County Road 14 running right in front, now replaced by faster and wider #62. 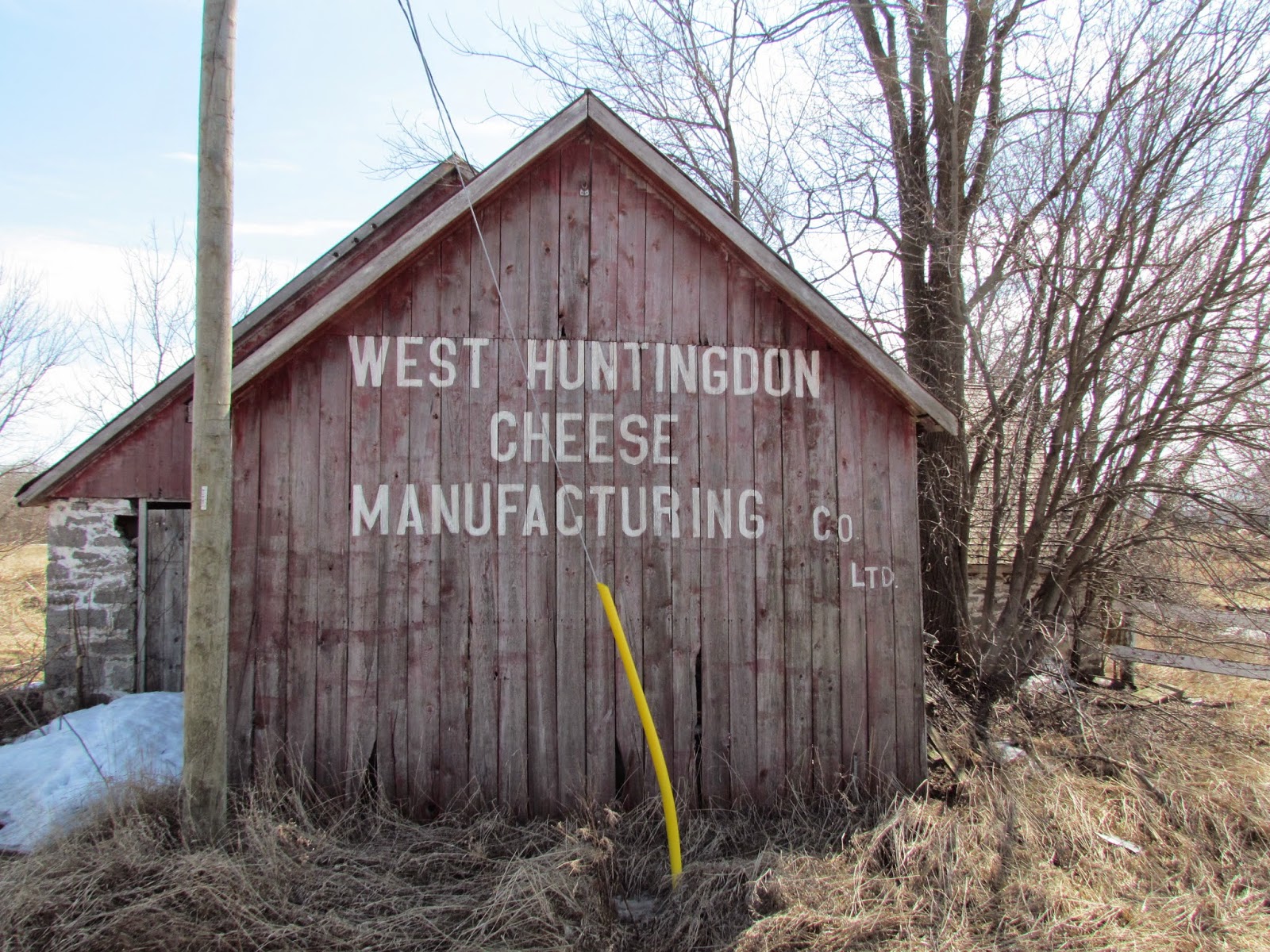 Once there were 26 cheese factories in Prince Edward county; 82 in Hastings (though maybe not all at the same time, thanks Orland.) There was a factory every couple of concessions.

By 1867, Hastings Co. cheese was winning provincial honours at agricultural fairs, by 1872 a cheese board took on marketing, and 4 million pounds were shipped from Belleville. During the 1890's, in the Moira watershed alone, there were 33 cheese factories. (thanks for the facts, Gerry Boyce.) The industry peaked in 1900.

Farmtown Park in Stirling does an amazing job of interpreting the growth of the cheese industry (and every other facet of farming life.) Here's an account of a Farmtown Park we made some time ago, with some photos of the cheese biz.

A couple of years ago, the Hastings County Historical Society ghost town bus tour stopped to pay homage to the Melrose cheese factory in Tyendinaga township. The foundation wall of aggregate was capped by a row of fieldstones. 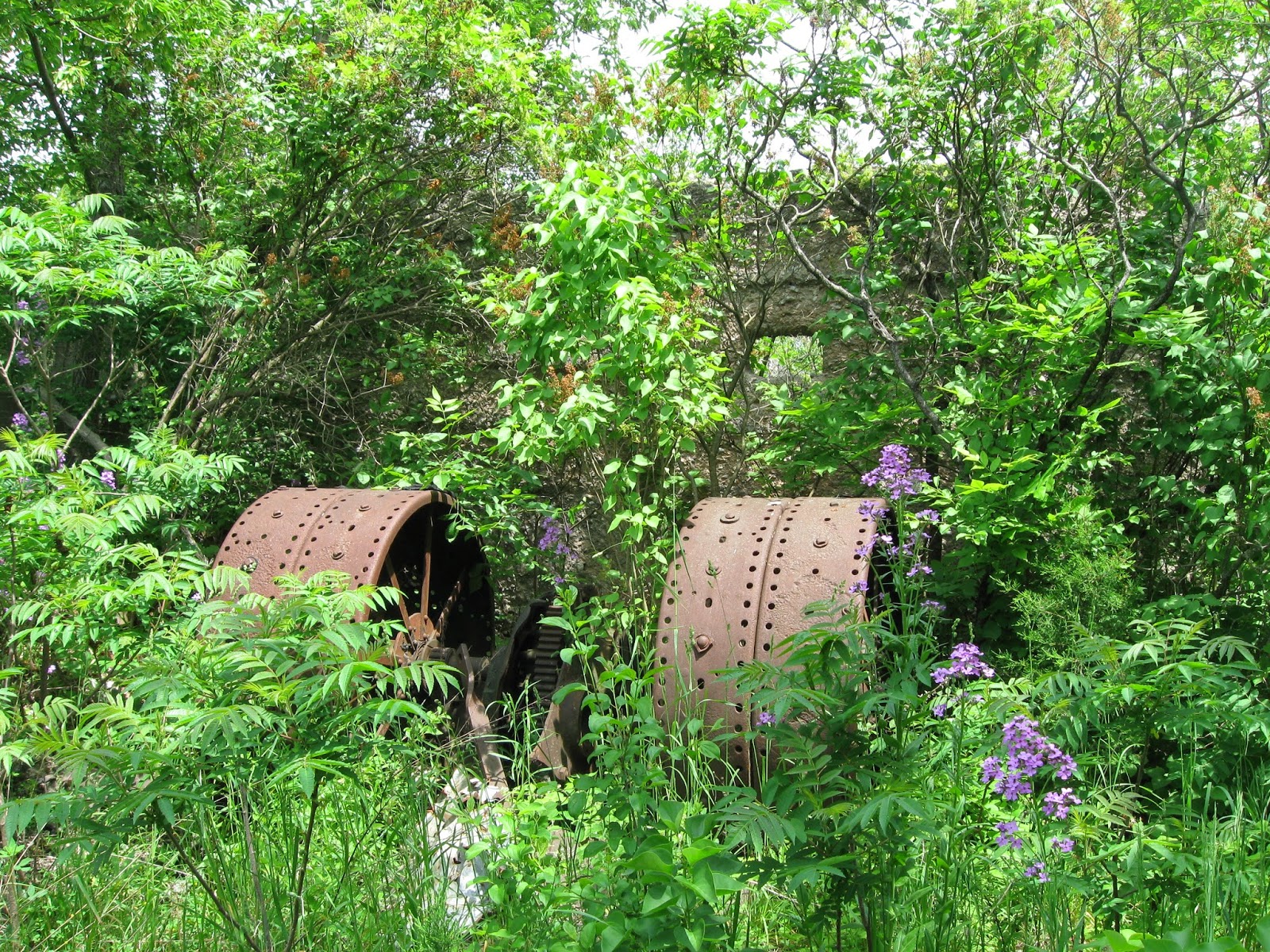 The old factory, built around 1875, burned in 1957. The fabric of this small community, begun so hopefully, named by the first storekeeper, Mr. Duncan, for his hometown in Scotland, was beginning to unravel.


I wonder if the c. 1875 Metcalfe cheese factory is still standing? I took this photo a couple of years ago, in South Bay, admiring the old board and batten and the pedimented window trim. Cruickshank and Stokes deemed it "one of the oldest still standing" when they published The Settler's Dream in 1984 (page 79).

There's a lovely photo of the original Ben Gill cheese factory on page 19 of SD also.

Posted by Ancestral Roofs at 11:48 AM