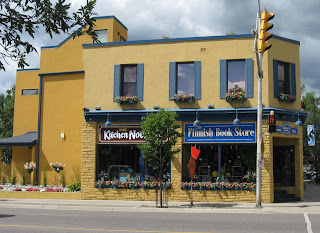 Spotted this title on a bookstore shelf in Thunder Bay's historic Bay and Algoma neighbourhood this past summer. Finnfacts. It caught my eye, as it was one of the titles that I could read. Many of the books and papers on offer at the Finnish bookstore were, well yes, in Finnish.

Although many weren't, likely respecting the fact that Thunder Bay's influx of immigrants from Finland had taken place in 1909/10, providing plenty of time for English to have nade inroads. 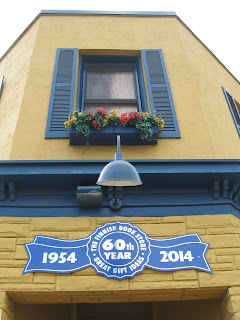 The fact that this Finnish book and gift store has celebrated its 60th year  speaks to the strong culture, and the creation of institutions that endure among the Finns of Thunder Bay.

Another structure on this leafy shopping street had even more to tell me about the Finns in the Bay. The building below, with the startling polygonal pagoda roof topped with a domed lantern and clad with tin fish scale roofing, is the Finnish Labour Temple, built 1909-10.

In the words of the Historic Sites and Monuments board plaque outside, the structure "reflects the committment of Finns to collective action and their influential role in Canada's labour movement in the first half of the 20th century. As a haali, it made available a wide range of social services and mutual aid to newcomers, workers and their families. The labour temple also housed newspaper offices, a library, a cooperative restaurant named Hoito, and an auditorium used for theatrical productions, athletics, and various events together contributing to the preservation of Finnish cultural traditions in Canada." Impressive. 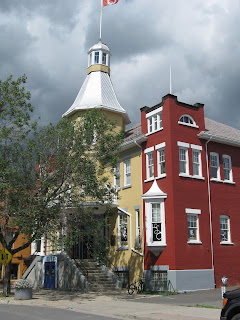 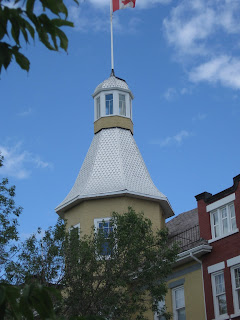 The brick veneer building facade is intriguing. This early photo found in an article online (thanks Thunder Bay) shows its structure. I like the choice of colours in today's painted iteration.

The centre section features a concrete porch with two columns, steps descending at each side. The historic photo shows the third, central flight of steps, which were removed in 1918, to gain access to the basement level for the cooperative workers' cafeteria, Hoito. This restaurant is still operating today. The main level houses the Finlandia club, with its balcony overlooking the street (the view of Bay Street strained through a vigorous street tree,)

The central semi-detached tower is polygonal in form; it ends in that astonishing pyramidal roof with the glass cupola with its 'chatri' roof (I looked it up, too) and a proud Canadian flag. Flanking the centre building are two square towers with oriel windows and battlements at the top.

This is hilarious. I just took a break from wordsmithing  to peek at Facebook, and discovered the post 'How Finland ruled the world' on the Facebook page Very Finnish Problems. Third post down (make sure your speakers are turned down.) Apparently the world is pretty impressed with Finland.

Posted by Ancestral Roofs at 9:59 AM