An article Den has just read reports the sale of  Lawren Harris' Mountain Forms for 9.5 million dollars, and observes that Canadian painting (of all eras one hopes) is on the ascendancy in Europe. Actor/art collector Steve Martin has recently ensured that thinking Americans know Lawren Harris and his artist associates.  If the group of painter-adventurers had not already had the last laugh, this unprecedented sale price would make up for all that "hot mush" invective they had to endure when they were the newest and most challenging painters about.


The announcement of the sale has me thinking about the time we spent in Lawren Harris' company on Lake Superior this summer. For surely his spirit is on the great lake, as it was on him.


The Group of Seven and their unique vision for Canadian art has been memorialized throughout the Algoma and Lake Superior regions in a series of roadside (and beachside) interpretative installations. These take the form of easels (with a handy seat) supporting a panel with a print of a Gof7painting inspired by the location, and lots of other images and information. More here.


Den's lodestone is Pic Island. Harris' well-known painting of the island was displayed (along with the real thing) at the top of our 9km. return hike through bear country, in Neys Provincial Park, where we lived well for a week in August.


At the outstanding Neys PP Visitor Centre, we learned about another location which drew some of the artists, the ghost town of Port Coldwell.


A search for resonance, as I call it, and perhaps signs of the life of the former fishing village which began in 1883, led us over the railway tracks and down a winding overgrown road to the cove. 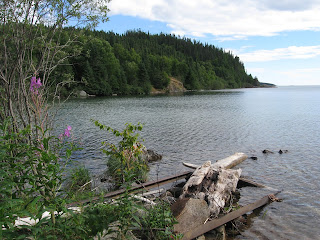 The village centre was up the hill, alongside the tracks. Coldwell was named for R.W. Coldwell, a Scot who supervised the blasting crew laying foundations for the CPR track struggling to impose itself onto Superior's resistant shore.

Astonishingly, Coldwell is buried in the little Port Coldwell cemetery (ironically, the only sign of life there.) Coldwell loved the place, and the folks loved him. Villagers bestowed his name on their village, and later, Coldwell asked for his remains to be returned from Scotland to be buried there. 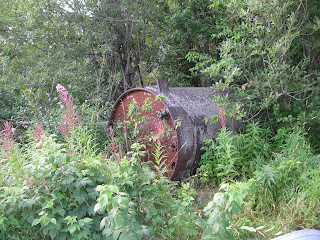 By 1915, thanks to the dual economic engines of commercial fishing and the railway, the village had 135 inhabitants,  and a general store, church and school.

In not the first time environmental issues have changed our fortunes, the improvement of shipping lanes in the Great Lakes system (eg. Welland Canal) led to the incursion of the sea lamprey, which destroyed much of Lake Superior's commerical fishing stocks. 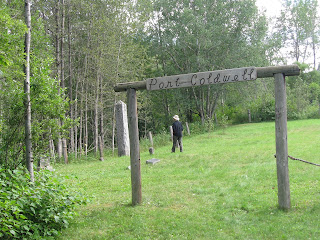 By 1960, the Port Coldwell fishery was dead, and by 1963, with the new Highway 17 taking shoppers further afield, the general store closed, and the village slowly died.

My photos of two of the Visitor Centre displays show the village as it once was.

These photos recorded a hot day in August 2016.

Incidentally, on another note entirely, but pertaining to significant buildings lost to history, Neys Provincial Park is the former site of a WWII POW camp, hosting Nazi officers. Here's a good account of this little-known chapter in our history. For a more in-depth study, join Den in reading The Little Third Reich on Lake Superior (University of Alberta Press, 2015.) Available at Belleville Public Library (once he's finished.)

Posted by Ancestral Roofs at 12:05 PM