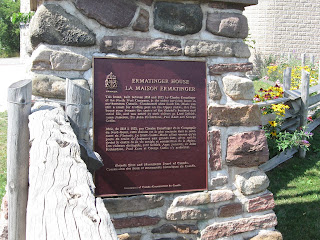 Friend Brenda recently observed that posts from this summer's five week holiday junket were oddly missing from this journal. Admittedly, most of our time was spent among pines, not people, but there were a few heritage highlights, and I confess, I have been slow to share.

Here's one now. Ermatinger House. I have wanted to visit this historic home since the first time it flashed by the car window, on a mission from campground to coffee bar, during our first visit to Lake Superior in 2003. This summer we spent 5 bewitching weeks along the shores of this greatest of great lakes. The voyage began with overnights at several provincial parks, including Pancake Bay. A day trip to nearby Sault Ste. Marie provided the time to visit, and learn about the home from the fine NHS interpretive panels, and from costumed interpreters Rebekah and Bradley. 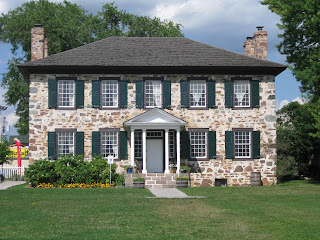 A 2015 newspaper article from SooToday titled 'Remember This? The many lives of the Old Stone House'' serves as a reminder that what we see when we visit our built heritage is often, of necessity, a total reconstruction/recreation ("No that wasn't the Ermatinger's chamber pot.")

In the case of a National Historic Site like Ermatinger House, one can be fairly sure of an authentic recreation based on scholarship and teams of craftspeople available to the National Trust. Here's a link to the Historic Places description. 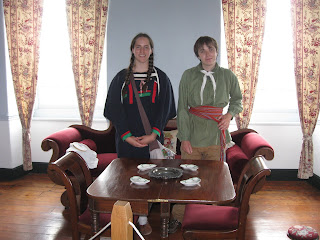 Our costumed guides Rebekah and Bradley explained that the house is almost completely rebuilt. It had fallen on hard times, divided into a number of tenement apartments by the 1940s. With not the most sympathetic treatment, one can only imagine.


One of the most interesting spots in the house was the cellar, where thanks to archeology and a few original bits, we could reach out and touch (well, figuratively) the actual fabric of the c1812 house. 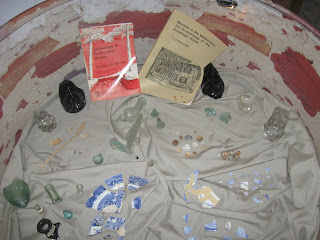 A book entitled The Archeology of the Ermatinger House hints at 'the scholarship of the bits' which took place here over shards of glass, china and buttons. 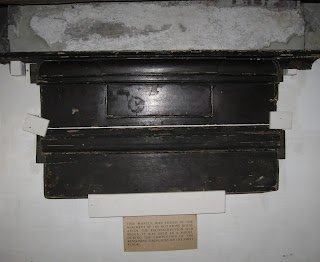 This Georgian mantel was original to the house. Discovered (lucky find!) in the basement as the restoration work began, it was used as the model for the recreation of all the main floor fireplaces.

Below, hand-forged nails, and a sample of slaked lime and horsehair plaster attempt to tell the building story.

Imagine the impact of this grand house in the wilderness of the early 1800s? 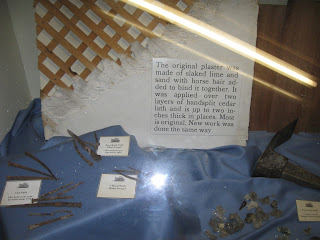 I expect this would be a fine example of what architecture historians sometimes call 'wilderness Georgian' which sums up the dignity and proportions of the Georgian style, with that particular wilderness flair (use of locally available materials, limited access to trained builders, the demands of climate...) 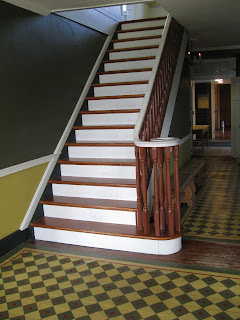 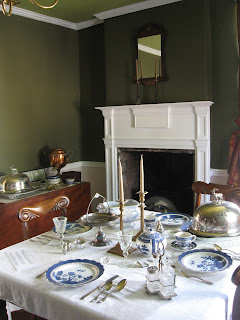 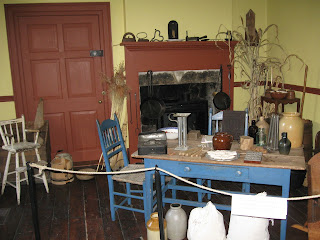 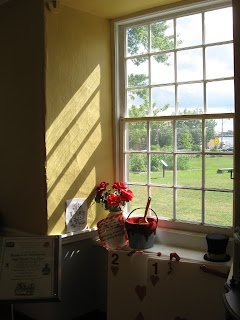 Through the handsome 12x12 sash, you can get a glimpse of the Sault Ste. Marie waterfront. What sights have been seen through these precious panes of glass!

(The rather disconcerting red bucket is part of a Mad Tea Party decor with which the parlour was being cleverly transformed, for a fund-raiser.)

The house was built of local stone and large cedar logs for Charles Oakes Ermatinger, a fur trader, eventually partner and agent for the North West Company, and his wife Mananowe, daughter of an influential Ojibway Chief (likely a good way to smooth business dealings between the two nations.) The couple raised thirteen children.

The house was completed in 1814, and remains the oldest stone building northwest of Toronto. 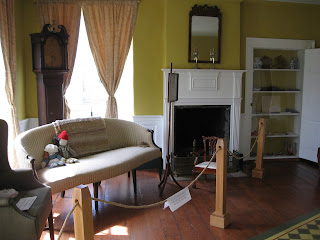 Hard to imagine how it would have looked to the first nations trappers bringing their furs to trade, or to the voyageurs who transported them to Montreal in their freighter canoes. Even among the 'best people' it likely made quite a stir. 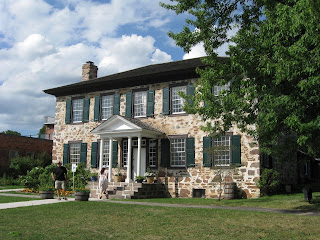 Understandably, the home became the centre of social, business and political life in the northwest in the early c19.  Interpretive panels upstairs in the house describe the social context.

Charles and his family returned to Montreal in 1828, and other local personalities took their turn at the tea table.  Missionary Reverend William McMurray lived in the house from 1833-38, when the house served as residence, church and school for the Ojibway of the Canadian Sault.

In 1853 it became the Stone House Hotel, and was later used by the sheriff, a judge and his court room, the YMCA as a boarding house and meeting hall, a social club with tea room, dance hall and outdoor cabins in the 1930s. Then there were the apartment years. It's a wonder Ermatinger House survived at all, but in 1964 the City bought the house, and began restoration (somebody deserves an award for that far-sighted move.) In 1970 it was declared a National Historic Site, and has never looked back. 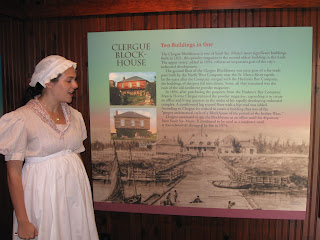 Also on the property is the Clergue Blockhouse. Unfortunately, we arrived too late for more than a breathless overview by this delightful guide, who was not about to let us go without a bit of the story.

There's always a book, yes? Right now, I'm awaiting the arrival of my latest interlibrary loan The Ermatingers: A Nineteenth Century Ojibway-Canadian Family, by W. Brian Stewart. I'm hoping it helps me understand the appeal of this place. It's about the architecture and furnishings, sure, and the lives lived here. It's about the vision of the folks who worked to preserve this piece of history, and about the energy and engagement of the sweet young people working there. But mostly it's that old time travel thing. I'm hoping the book, will help me revisit, to connect to faraway SSM and the faraway beginnings of our nation.
Posted by Ancestral Roofs at 5:44 PM