Upward, in map-speak, is further north.
And this is where I intend to take you.


Last week I posted about my journey to Ormsby along the Old Hastings Road (or what remains of it) and the vanished or vanishing villages along its twisty route - Milldbridge, Glanmire, Thanet. 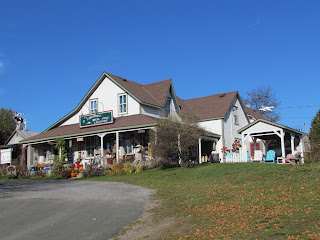 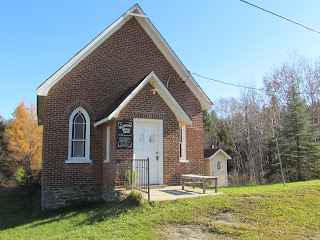 Ormsby is an exception, a vibrant spot along the OHR. Doomed to ghost town status by folks like Ron Brown, Ormsby is doing very well, thank you very much, all credit to the dedication, hard work, and vision of the Pattisons. It's quite remarkable really. I have written about them on AncestralRoofs, and in the Spring 2012 issue of Country Roads magazine. Check out their website.

I first met this delightful family in 2012. Shortly after that, Denis and I visited the tea room. 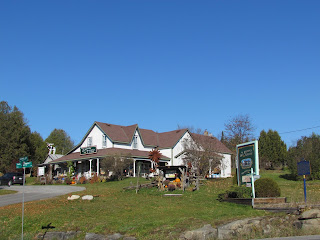 Logging and the railway created a bustling community in the late 1800s; their demise led to the near-death experience of the village. Only the store keepers, the Parks family held their ground, operating the store until 1975. 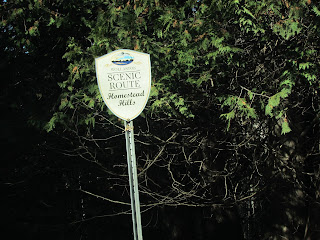 It's that very store that today is home to the enormously popular Old Hastings Mercantile and Gallery. Owners Lillian Oakley Pattison and Gary Pattison (quite interesting folks, do go meet them) bought the empty store and made magic. They are also behind the reopening of Ormsby's Presbyterian church as the Old Ormsby Heritage Church, which hosts wonderful anniversary and Christmas services. Gary's twin brother Ernie and his wife Debbie restored the village schoolhouse, and have created another popular stopping place, the Old Ormsby Schoolhouse Tearoom. It takes people like the Pattisons to raise a village.

Ormsby is certainly a bright spot on the dark road, and sorry history of the Old Hastings Colonization Road. 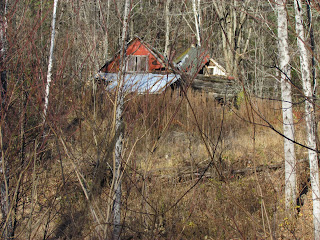 North of the village (population: 20) the road is no less curvy or hilly (there's one very interesting right angle turn/steep hill combination) but as Lillian and Gary assured me "it's a school-bus route." I think it truly was wider that the previous section, and very well graded. No comforting guard-rails however, so there were a few corners providing mouth-drying views to the forest floor well below.

The Wollaston township scenic route sign identified this stretch as Homestead Hills. Unfortunately, due to the need to keep eyes (and Blanche) on the road, I saw little evidence of homesteads. Will do the stretch again with my co-driver who is better at finding parking in dubious places. 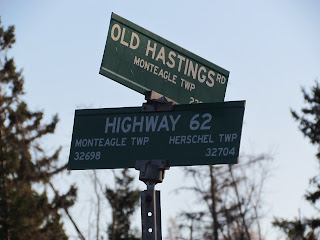 Just before the point where the OHR rejoins today's Highway 62 south of L'Amable (and, I'm guessing, where it begins to follow the same route) is the entrance to the old Irish settlement of Umphraville; its post office operated from 1864 to 1916. This road was definitely a four-wheeler track, and Blanche talked me out of trying it. It was the beginning of hunting season, another good reason not to be bashing about in the woods. The Spring 2012 issue of Country Roads magazine tells the story of the Umphraville Cemetery, and the folks who tend it. The cemetery is just about all that remains of an 1850s village which once offered a second slim chance to many "surplus tenants" on Irish estates, who had been forced off their small holdings and onto immigrant ships (6000 from one estate alone!) during the potato crop failures of the 1840s and 50s. 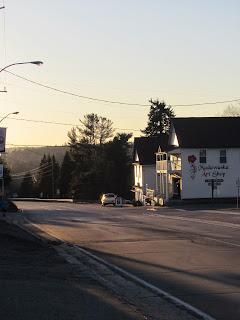 Just south of Maynooth, the OHR reasserts itself, in a short side-trip over a hill and down into the town. This thriving village with its unique general store, a farmer's market and a lively arts community. was called a variety of names as it grew - Tara, Oxenden, Doyle's Corner. Maynooth was among the latest spots along the OHR to be settled. Once again, the settlers were mostly displaced Irish.

I'll leave the next stage of the journey to another time. For it is at Bancroft and again at Maynooth that the colonization road story branches out in a different direction, onto the east-west lying Monck and Peterson Roads.

For a much more detailed trip along the Old Hastings Road, and the family stories written there, pick up a copy of Paul Kirby's painstakingly researched book The Trail of Broken Hearts (Kirby Books, 2014.)
Posted by Ancestral Roofs at 1:55 PM