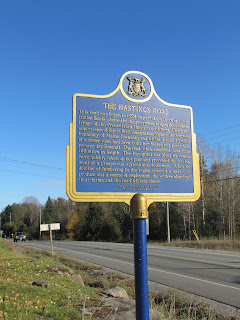 A story idea provided the external motivation. Paul Kirby's well-researched book The Trail of Broken Hearts and my trusty road atlas supplied the guidance. The occasional glimpse of an ancestral roof slowly returning to the rocky soil which spawned it kept me going. In two installments, on Saturday and Monday last week, I travelled the Old Hastings Road, from its beginnings just north of Bannockburn to its junction with the Peterson Road in Maynooth.

Throughout Central and North Hastings counties, along the main corridor, Highway 62, appear occasional invitations to time travel. Just north of Bannockurn, in Bancroft and again in Maynooth, highway signs keep the name Old Hastings Road alive. In other places the current highway follows the original route. 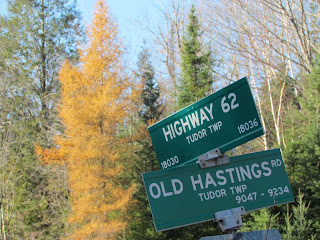 Might be wise to begin with the road report. Many parts of this road are not for the faint of heart. The very start of the colonization road, at Lot 1 in Tudor township, is no longer maintained and not navigable - at least not for Blanche, my trusty Honda FIT. Rather a tribute to the folks who struggled north on this road, when it likely didn't come anywhere close to the condition shown in this photo! 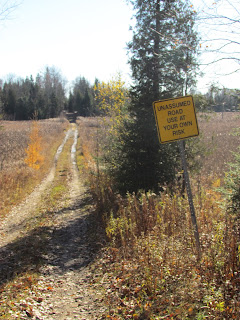 In 1853, the government of the day provided funds to open roads to northern parts of the county for settlement. Surveyors, road builders and land agents went to work and free grants of 50 acres were taken up by immigrants looking for a future.

The rules were simple. First you had to find your grant of a few acres in the impenetrable and endless forest. Then you had four years to clear 12 acres , build a house 18 x 20 feet, and maintain the road past your property. Between 1856 and 1863 1000 hopeful souls travelled the road and took up their claims. Before long, the numbers began to dwindle. Unsurprisingly, optimistic early reports of the soil quality were downgraded over the years. A 1962 report indicated that 12.5 percent of the soil in the region was suited for agriculture. Swamps. Rock. Hills.

Were these immigrants tricked? I understand there was pressure by the logging companies to open the roads for timber harvesting. They also would benefit by any agriculture which would provide them with supplies, as well as a local labour pool.

Across Highway 62 from that remaining southern section of the OHR  is a well-maintained road leading to Millbridge, Glanmire, Thanet, Murphy's Corners and Ormsby.

Millbridge is the first community, heading north on the Old Hastings Road. At one time it bustled with three hotels, mills, stores, a school, a town hall, and a church. Its streets are paved, and many of the old buildings are still inhabited, including St. Oswald's Anglican Church. 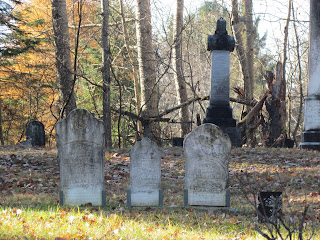 Down the road is the cemetery. Cemeteries always survive, even when other traces of living early settlements have long disappeared.

Settler Anna Leveridge wrote her poignant letters home to England from a log cabin just south of Millbrige on the OHR. A trip along the road, even today, makes Your Loving Anna come alive for me. 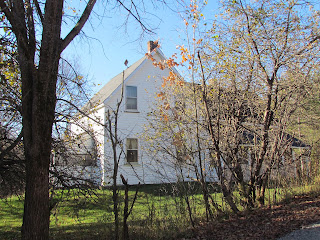 A white frame two-storey farmhouse on a well-maintained property north of Millbridge suggests that someone was able to remain, and build that second home, after the first years in a log house.

It's conceivable that the lower kitchen wing could have been the original log house. Sometimes these first houses of Upper Canada's settlers were repurposed as sheds or barns, other times incorporated into the second home. Sometimes the more sound ones were clad in planks or even brick, as the family's prosperity grew. John Rempel shows a great example on page 36 in Building With Wood.


The next house is just south of Millbridge. I'm guessing it's a log house, later clad with lumber, now with roughcast, judging from the position of the upstairs windows. 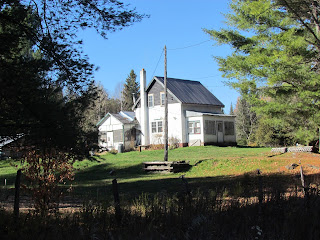 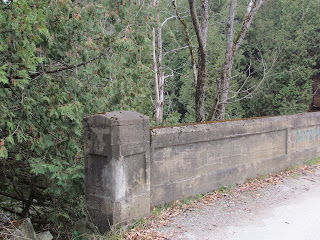 Things get pretty gloomy in the middle section of this road. Although the hard-packed surface (at least in a dry November) was good, the road travels through deep cedar woods, mostly blind corners and hills, and hardly more than one vehicle wide.

Very little traffic, but the occasional Ford F150 or quad kept us very alert. Few spots to stop for a photo; unfortunate as this section gives a pretty good feel for what it might have been like (but for the reassuring presence of the hydro lines.)


Eleven km. further on, Jelly's Rapids on Beaver Creek was the site of Glanmire (originally called Jelly's Rapids for the first settler in 1856.) Today a picturesque concrete bridge over the fascinating geology of the creek, and the nearby cemetery are all that remain of
hotel, mill, post office, school and church,

For a little geology sidetrip, here's a video shot by some cavers...and I think the rock is basalt, guys.


Glanmire had a good mill site (not clear on whether a mill materialized), a post office, and was a lively community. Kirby includes descriptions of the OHR version of church lawn fetes in the 1870s to 90s. How important such diversions would have been in the very hard lives lived there.

By 1887 St. Margaret's Church and cemetery were established. By the mid 1970s the church was deconsecrated and demolished. The steps remain.

Thanet is another settlement along the road memorialized by its cemetery, which a group of citizens rescured from oblivion. There are little handmade signs for the genealogist, telling the settlement story in a minimal way. 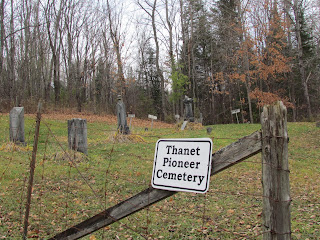 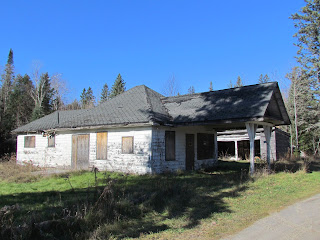 All that remains of Murphy's Corners is the old gas station. A log house existed until very recently, according to people I've talked to.

The Murphy family left starving Ireland in the years from 1851 to 1859, in stages, as funds permitted. Not sure which side of the ocean would have been more difficult for the Murphys. 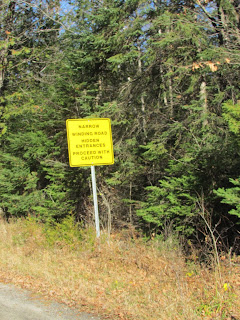 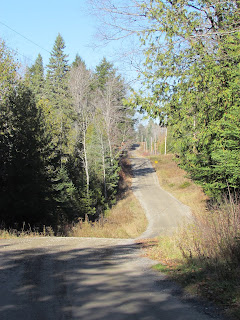 Murphy's Corners is the beginning of the last stage before Ormsby - and I use the term 'stage' advisedly, as the Tall Pines Rally uses this challenging technical stretch. (Here's a link to the reason why you don't want to be on this section of the road on November 26th.) 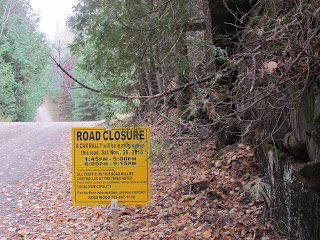 At the top end of this bendy stretch of OHR, around a final bend through the cedars, past the two churches, the road opens out onto the settlement of Ormsby. More on that lovely spot later, in the voyage along the Old Hastings Road - from Ormsby to Maynooth.

All along the way my thoughts were on the settlers,  Irish and Scottish tenant farmers who were forced by uncaring landowners and famine to take the desperate move to emigrate into this terra incognita, wooed by the opportunity for free land - land of their own, on which to build a future.
Posted by Ancestral Roofs at 11:00 AM