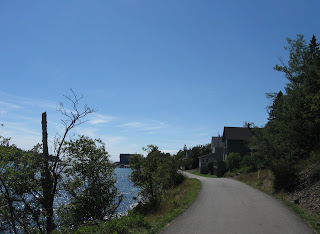 We spent time in one of our favourite Lake Superior communities while we camped at Sleeping Giant provincial park this summer. This tiny old village on a sheltered bay of the great lake has evolved into a rustic cottage community. It's an historic place with its face to the lake and its back warmed against the rock. 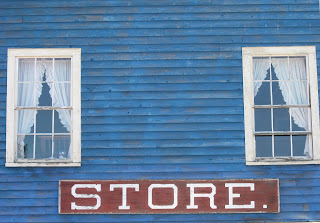 On our previous visits, the old store was still open, providing a community centre. Further down the road, a little gift shop rested on a rocky ledge.

The village is Silver Islet. 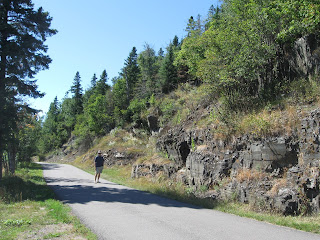 A walk along The Avenue is always a lovely break from the busy-ness of camp life  a short cycle away.

And this would be enough. But the old shore road with its unique cottages at the tip of the Sibley Peninsula is a history portal.

An OHT plaque beside the former general store tells it much more succinctly that I ever manage to do: 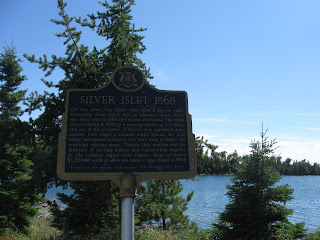 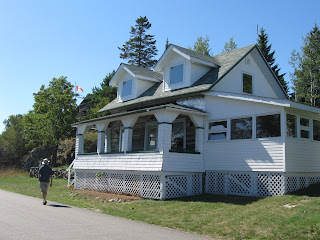 "Off this shore lies Silver Islet, once a barren rock measuring about eighty feet in diameter, where silver was discovered in 1868 by Thomas MacFarlane. The claim was purchased in 1870 by a company headed by A.H.Sibley, and one of the partners, W.B.Frue was appointed mine captain. Frue waged a constant battle against the lake which undermined extensive crib work used to bolster the restricted working space. Despite this problem and the difficulty of housing miners and transporting supplies in the isolated region, this famous mine produced $3,250, 000 worth of silver ore before it was closed in 1884."

The outstanding visitor centre at Sleeping Giant tells the rest of the story. 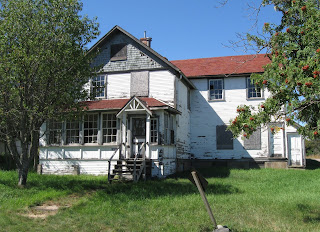 Miners from Cornwall (England,) Ireland, Germany and several American states, including veterans of the copper mines of Michigan, along with their families began arriving in 1870; shelter for that first winter was in tents.  Eventually, in this complete wilderness accessible only by water, the village grew to contain a government office, two churches, a large store (still standing,) homes for officials and cottages for miners, a jail. schoolhouse, company office. Gravel roads, a dry dock for boat repairs, wharves and a lighthouse created the best safe harbour  for 500 miles of treacherous Lake Superior shoreline. I find it absolutely astounding what was created.

Log cabins were built for the married miners. It is these sturdy survivors which give the Silver Islet cottage community its unique character. 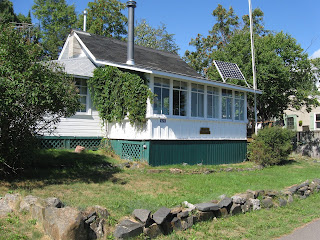 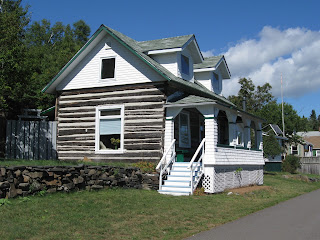 And what was accomplished, at what cost in labour on land, was eclipsed by the struggle against the lake, fiercely protecting its cache of silver. 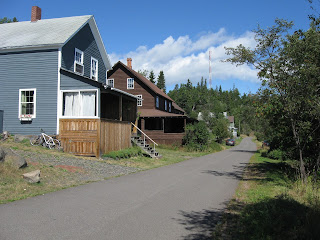 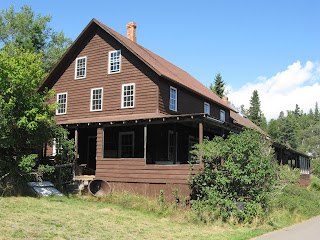 This video, posted on YouTube by creator Peter Elliott, tells the story. (Hope he doesn't mind that I share it here, to help keep the story of Silver Islet alive.) 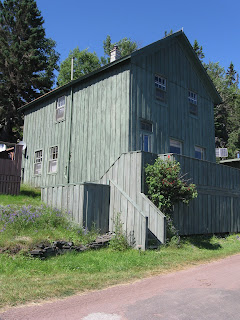 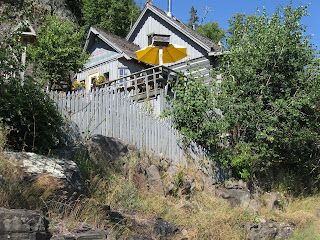 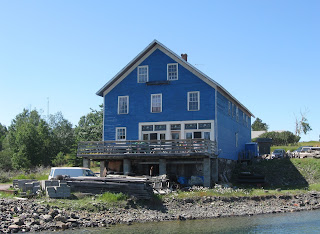 If you've managed a look at the video, you will recall the image of the tiny scrap of island (a reef actually) where the silver was discovered, and where the substantial mine workings were built (and rebuilt) at what cost in appalling labour and lost lives. Here are a few public domain photos I found, courtesy of Thunder Bay Library's 'Gateway to Northwestern Ontario history.

Posted by Ancestral Roofs at 5:26 PM